Monastery Run Wetland 1 near Latrobe, Pennsylvania, is a passive mine water treatment system constructed in 1997–1998 to treat multiple discharges from an abandoned underground mine. The OSMRE Technical Support Division assisted the Pennsylvania Department of Environmental Protection (PA DEP) with diagnosing issues and improving the effectiveness of the water treatment system. The Wetland 1 system was constructed to provide settling ponds and wetlands with sufficient retention time to allow the removal of iron prior to entering Four Mile Run river. In July 2019, OSMRE personnel conducted an optical dye tracer test to determine the approximate retention time of each of the four cells comprising Wetland 1. OSMRE’s unmanned aircraft system (UAS) was not available during a July 2019 dye test when OSMRE and PA DEP personnel added a fluorescent yellow/green dye (Xanthene) at the main mine water source in Cell 1. The initial dye tracer test was successful at determining the retention time in Cells 1 and 2. However, the dye became extremely diluted and difficult to track in Cells 3 and 4 because of the addition of a considerable mine water source in Cell 2. Therefore, a second dye tracer test was conducted in August 2019 with the help of the UAS to record the progression of dye through Cells 3 and 4. In August 2019 the fluorescent dye was added at the outfall of Cell 2 into Cell 3 within the Wetland 1 treatment system. The UAS consisted of a 3DR Solo with GoPro Hero4 Black camera. Due to the 3DR Solo battery life, there were a total of 12 separate flights (8–10 minutes each) at a maximum height of 200 feet above ground surface to track and record the progression of the fluorescent dye through Cells 3 and 4.  According to the original design information, total retention time should be 29 hours at the peak design flow of 1,710 gallons/minute (gpm). Based on visual dye detection on August 2019, the retention times in Cells 3 and 4 were 61 and 66 minutes, respectively. By way of comparison, the approximate retention times in Cells 3 and 4 during the August 2019 dye test as estimated from the UAS aerial videos were 64 and 66 minutes, respectively. When retention times were totaled from the dye tests for each of the four cells, a hydraulic retention time within Wetland 1 was approximately 4.65 hours. Therefore, the results of the testing indicate that major modifications are necessary to the Wetland 1 passive treatment system to improve both retention time and aeration for dissolved iron removal. 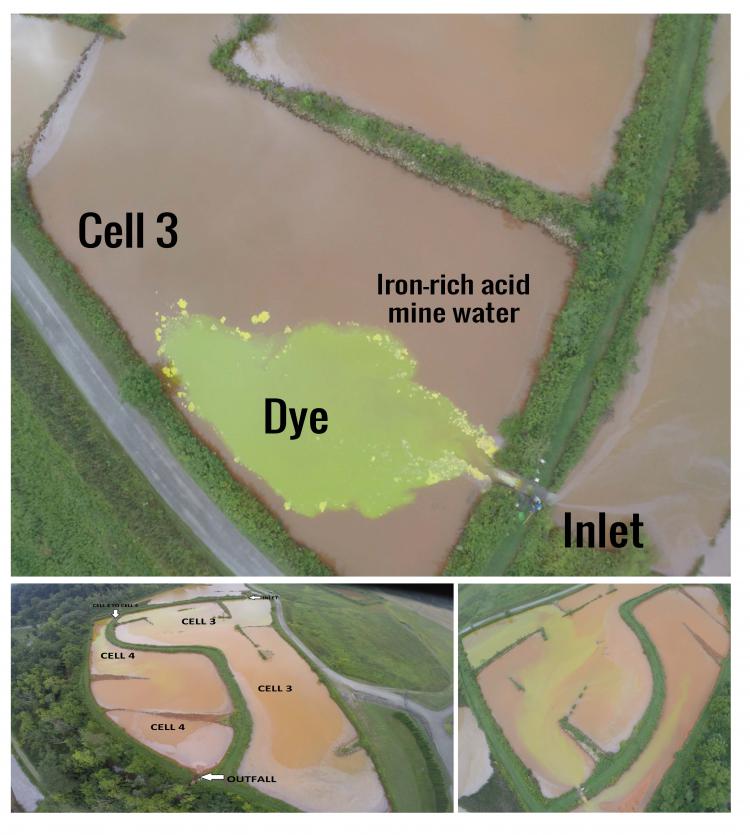 Images show the dye poured at the inlet, moving through the cells to the outfall, captured by unmanned aircraft system (UAS) video. The width of pond at its thickest is approximately 500 feet, with images oriented clockwise from the top toward the SE, W and NNE.