The Jean Lafitte National Historical Park and Preserve (JELA) in southeastern Louisiana is being invaded by feral hogs (Sus scrofa) and needs a systemic survey to determine the distribution and number of hogs that exist within the park boundary. Feral hogs can reproduce and increase their range rapidly, are highly destructive to streams, wetlands, native plants and farm fields, and can spread disease to native wildlife populations. The U.S. Fish and Wildlife Service-Division of Migratory Birds Management (DMBM) operates an advanced dual thermal sensor system to support its continental migratory bird monitoring mandate. These sensors are also applied to meet the needs of other agencies and programs, such as the primary objective of this project, to use high-resolution thermal infrared imagery at approximately 0.25 meters (10 inches) per pixel to locate and count feral hogs in and around JELA during the winter of 2019–2020. The survey also counted similar medium-sized ungulates such as white-tailed deer (Odocoileus virginianus) and produced GIS-ready orthoimagery for additional analyses. This mission will be collected using a co-mounted pair of the U.S. Fish and Wildlife Service-DMBM new FLIR A8303sc cooled mid-wave thermal infrared cameras. The A8303sc has a 1,280 by 720-pixel sensor and collects frame-based imagery that can be directly georeferenced using simultaneously generated exterior orientation (X, Y, Z expressed by GPS and roll, pitch, and yaw as detected by the inertial measurement unit). At 914 m (3,000 feet) above ground level, the 50mm lens required 61 flight lines and roughly 17,000 thermal frames. 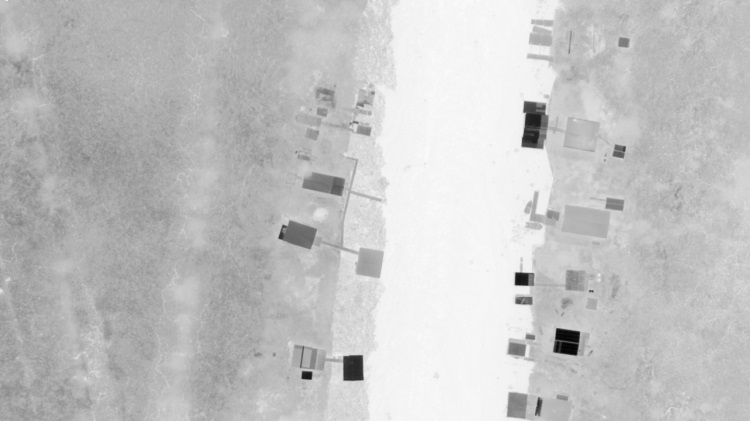