Sagebrush ecosystems provide valuable services to society, including recreational and economic opportunities like hunting and fishing, energy development, and livestock grazing. Sagebrush ecosystems also provide habitat for wildlife, natural systems for carbon sequestration, and resources for human habitation. However, sagebrush ecosystems are stressed by climate warming and repeated disturbances that modify the ecosystems’ characteristics and impact these valuable services. The most common disturbance is wildfire, which is initiated, exacerbated, and perpetuated by the invasion of non-native annual grasses. Knowing where a tipping point (i.e., a long-term or permanent transition) from a species-rich, natural system to an invasive grass–dominated system 1) has occurred, 2) is likely to persist, or 3) is likely to happen in the near future is critical information for land managers, policy makers, and scientists studying and making decisions about sagebrush ecosystems.

Scientists from the USGS Earth Resources Observation and Science (EROS) Center and the Bureau of Land Management conducted a study that used a time series (2001–2015) of temporally rich enhanced Moderate Resolution Imaging Spectroradiometer (eMODIS) satellite imagery in conjunction with abiotic data integrated into a model that was ingested into machine learning and mapping software. A spatially explicit, predictive map of three classifications of sagebrush condition resulted. The map shows three probabilities (high, moderate, low) for each of the three classes: tipping point, sagebrush recovery, and stability. Slightly more than 57% of the study area was classified as tipping point and 29% as sagebrush recovery during the 15-year period. Approximately 14% of the study area was classified as stable. The stable class occurred mostly at higher elevations with greater precipitation and cooler peak summer temperatures, allowing native vegetation types to better compete against the invading grasses. As climate continues to warm, the environmental advantage for native vegetation at higher elevations may end, and wildfires, which result in tipping points, may occur here. 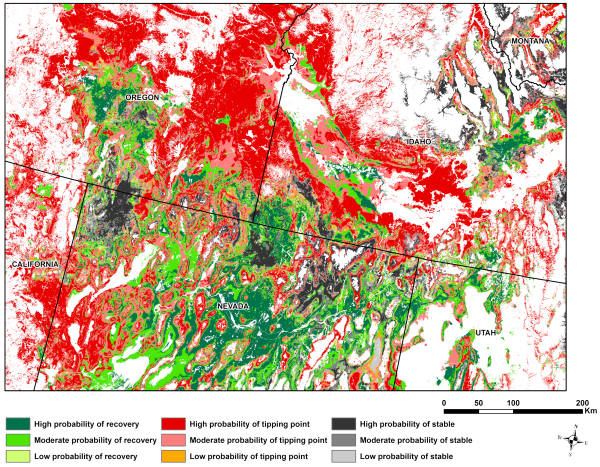 A spatially explicit representation of a time series (2001–2015) of the probability of sagebrush condition classes in the western United States. The figure is a product of satellite and abiotic data integrated into a model that was ingested into decision-tree and mapping software. The white mask represents areas not classified as sagebrush ecosystem.