Barrier islands, headlands, and coastal shorelines provide numerous valuable ecosystem goods and services, including storm protection and erosion control for the mainland, habitat for fish and wildlife, salinity regulation in estuaries, carbon sequestration in marshes, and areas for recreation and tourism. These coastal features are dynamic environments because of their position at the land-sea interface. Storms, wave energy, tides, currents, and relative sea-level rise are powerful forces that shape local geomorphology and habitat distribution. In order to make more informed decisions, coastal resource managers require insights into how these dynamic systems are changing through time.

In 2005, Louisiana’s Coastal Protection and Restoration Authority, in partnership with the University of New Orleans and the USGS, developed the Barrier Island Comprehensive Monitoring (BICM) Program. The goal of the BICM Program is to develop long-term datasets for habitat coverage, shoreline assessments, shoreline position, topobathymetric changes, and sediment characterization to assist with planning, designing, evaluating, and maintaining current and future barrier shorelines. The overall objectives of the study described in this report were to (1) map habitats for 2008 and 2015–2016 for BICM coastal reaches and (2) map habitat change between these two time periods.

This report highlights the second phase of habitat analyses for the BICM Program. The work builds on a previous habitat analysis conducted by the University of New Orleans, which included the development of habitat maps for 1996/1998, 2001, 2004, and 2005, along with habitat change maps. For this current effort, a new 15-class habitat scheme was developed from the original BICM scheme to further delineate various dune habitats, including meadow habitat found along the backslopes of dunes; to distinguish between marsh and mangrove; and to distinguish between beach and unvegetated barrier flat habitats. Additionally, a geographic object-based image-analysis-based mapping framework was used to incorporate relative topography and address elevation uncertainty in light detection and ranging (lidar) data to assist with mapping dune and intertidal habitats.

The results of this study provide information about the areal coverage and distribution of habitats for two recent time periods and change over an approximately 8-year period. These data can be used to evaluate changes along the Louisiana Gulf of Mexico shoreline, including gradual changes caused by coastal processes, restoration actions, and (or) episodic events, such as hurricanes and extreme storms. 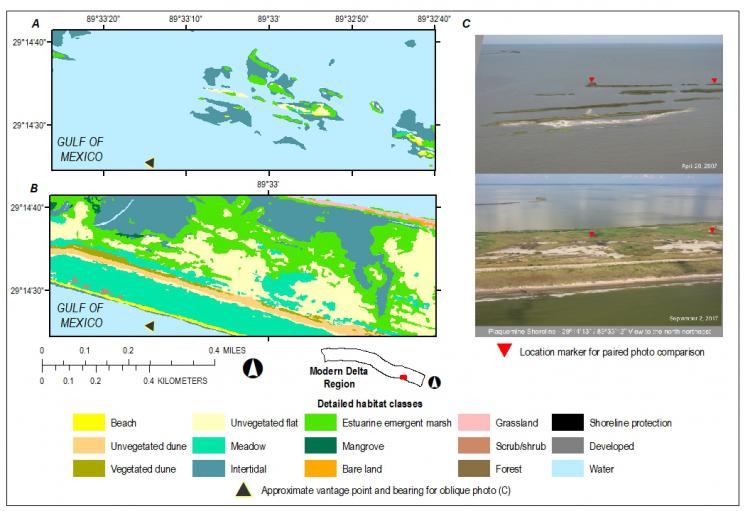