Satellite monitoring of evergreen pinyon-juniper ecosystems in Arizona revealed an unexpected winter-peaking signal in a time series of Normalized Difference Vegetation Index (NDVI) values. The interpretation of the unusual timing is that the imaged vegetation experienced maximum greenness during the coldest season of the year. To assess the validity of the peaks, NPS and USGS scientists examined both satellite and ground-based data sources. The team assembled an NDVI time series from daily Moderate Resolution Imaging Spectroradiometer (MODIS) satellite imagery collected from 2003 to 2018 over a pinyon-juniper woodland in northern Arizona. For the ground-based portion of the study, they used a “phenocam”—a camera designed to track phenology—to collect daily images of representative pinyon-juniper species from September 2017 to December 2018 at a site within the woodland area. Investigation of the satellite-derived time series revealed that solar-to-sensor angle, sensor zenith angle, and forward/back-scatter reflectance explained more than 80% of the intra-annual NDVI variability. Solar-to-sensor angle, which exerted the greatest influence, is controlled seasonally by solar zenith angle and daily by variations in satellite overpass geometry. In contrast to the satellite-derived patterns, the vegetation species within the phenocam field of view experienced warm-season peaks in NDVI, invalidating the possibility that the satellite signal was accurately capturing true expressions of plant growth. To determine the geographical extent of the winter-peak phenomenon, the team mapped the timing of MODIS-derived NDVI maximums across the western United States using Google Earth Engine and LANDFIRE vegetation data. The results show that winter peaks occur consistently in widespread pinyon-juniper and conifer ecosystems and are less frequent but still common in shrubland ecosystems. Winter peaks can be attributed to solar/sensor geometry effects that overwhelm the relatively muted growth dynamics of evergreen vegetation in sparse, vertically oriented canopies. The team documented the characteristic winter increase in NDVI in data derived from multiple satellite sensors, demonstrating that the issue is not specific to MODIS. These findings are critical for natural resource managers and researchers who rely on satellite time series to assess the health, status, and trends of diverse ecosystems across the U.S. West. 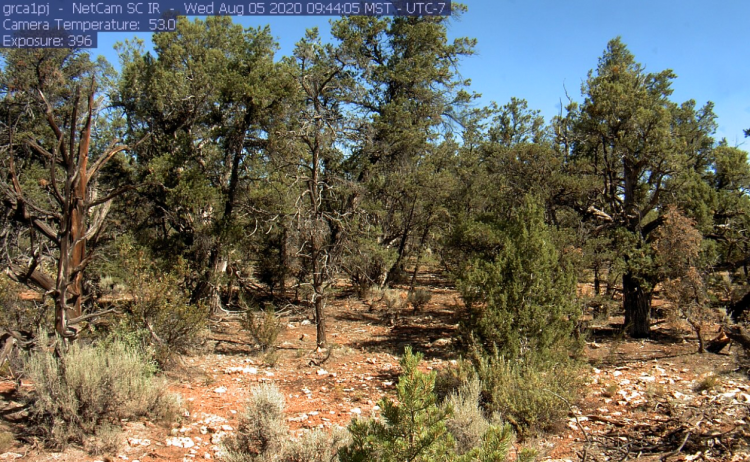 Phenocam field of view at the ground-based pinyon-juniper monitoring site in northern Arizona. Daily and archived images can be accessed online through the PhenoCam Network data repository.