Corral Bluffs is a region at the eastern edge of Colorado Springs, Colorado. The geographical landscape consists of 121-meter high bluffs containing an abundance of culturally important archaeological and paleontological resources. The area includes evidence of the Cretaceous–Paleogene (K/Pg) boundary, a geologically meaningful mass extinction event that marks a historical decline of biodiversity. The exposed outcrops in this region represent the first million years after the extinction of the dinosaurs, an important part of the planet’s history that is essential to understand. These outcrops contain numerous plant and vertebrate fossils and, when backdated, offer clues to how the Earth rebounded after a mass extinction event.

The geospatial data were collected using a BirdsEyeView Aerobotics Firefly6 unmanned aircraft system. The aerial platform was equipped with a consumer-grade Sony RX1R II camera to capture imagery suitable for SfM techniques. The base map and three-dimensional model generated by this technique supported the extraction of centimeter-level topographic elevations for hundreds of fossil bed exposures. Accurate elevation measurements are essential for fossil backdating. These estimated dates are calculated by measuring distances from known stratigraphic dated layers. With these data, researchers are building a comprehensive timeline of how the planet rebounded, providing insight into how mammals evolved and then thrived after a mass extinction event. 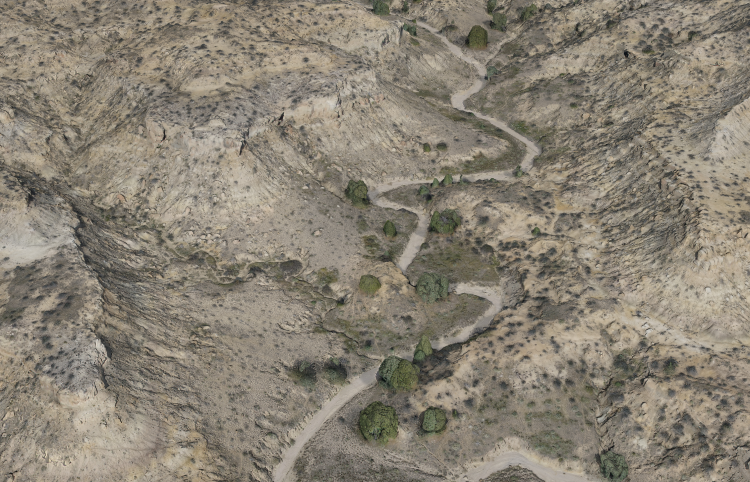 This three-dimensional textured digital surface model was collected from a BirdsEyeView Aerobotics Firefly6 unmanned aircraft system of the Corral Bluffs study area, Colorado. The image is oriented with north toward the top and captures an area of approximately 1000 feet x 1000 feet.