The western United States is increasingly threatened by landscape-level changes such as alterations in precipitation patterns, heightened wildfire incidence and intensity, and increased use of ground and surface water resources by a growing human population. Watershed restoration practitioners seek to address these threats using a variety of techniques such as gabions, check dams, one-rock dams, and cross vanes. Research has shown the positive effect of these structures on the hydrology of a watershed, but less is known about the ecological effects. Field data collection provides highly detailed information about changes in species composition and vegetation structure but is resource intensive and limited both spatially and temporally. In contrast, satellite imagery is easily available, allows for the analysis of whole landscapes, and in limited cases can provide decades of acquired imagery.

Using the Landsat archive, watershed restoration projects that started in the 1990s and earlier in the San Bernardino watershed along the United States-Mexico border have been studied, showing the effects of restoration extend at least 5 kilometer downstream and 1 kilometer upstream of a restored area. The scale captured by satellite imagery allowed for analysis of a cross-border watershed that would have otherwise required tackling the logistical challenges of an international field study. Additionally, the extensive archive of Landsat imagery allows analysis of this restoration, which did not have any scientific monitoring effort included as part of the project. With higher spatial resolution imagery, such as that provided by the Sentinel-2 platform, the location of individual structures can be monitored for vegetation response in addition to the larger landscape. Sentinel-2 imagery will be used to assess recently completed restoration projects across southeastern Arizona and determine the effects of restoration on multiple scales across the landscape.

Satellite imagery is also a fantastic tool for communicating scientific concepts to a broader community because this type of visual representation of the Earth’s landscape is intuitively understood by the general population. Even false-color images, where bands other than the traditional red-green-blue are used in the image, can be understood easily because of the familiarity people have with satellite and aerial imagery.

Landsat imagery, converted to a false-color image (RGB: NIR – NDVI – Red), was used to create a time-lapse video of the effects of restoration in the San Bernardino watershed that was shared on social media platforms and within the local communities. 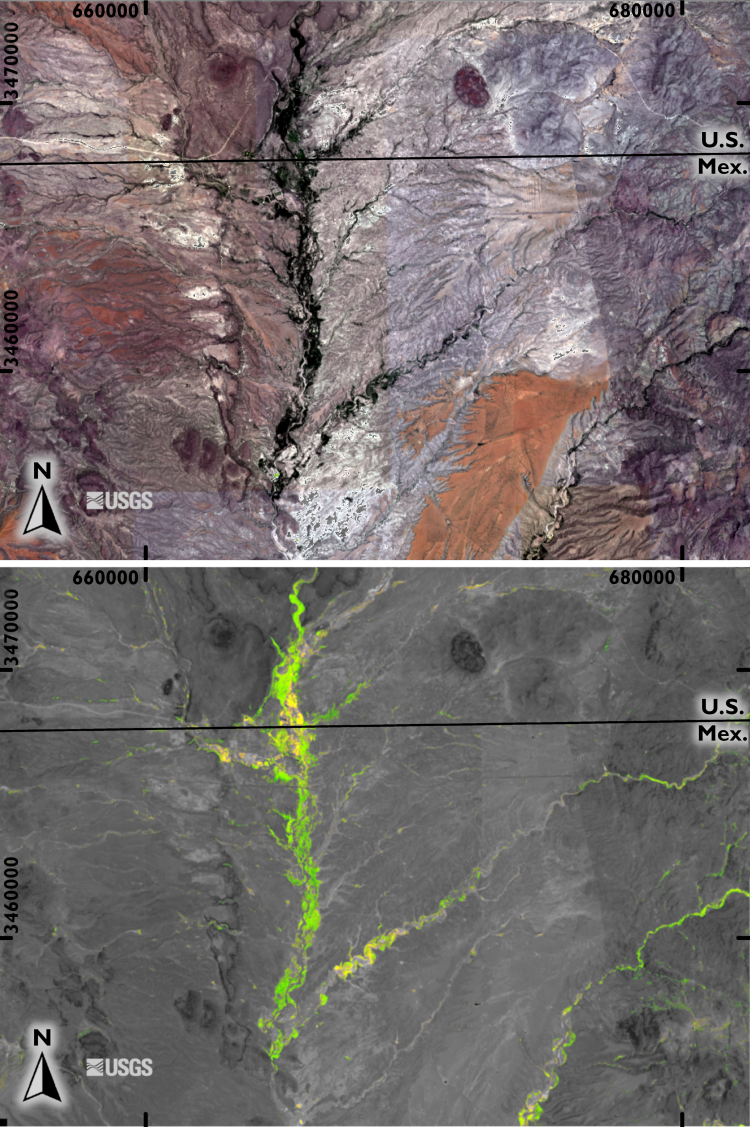