Canals and Levees A The Everglades and Miami, Florida, USA story

Historically, water flowed slowly southward through the Everglades in a wide swath. Record floods in 1947 and 1948 led to the construction of a massive flood control project. It served to prevent flooding and store water during dry periods. It also allowed for further development of the growing urban area on the Atlantic coastal ridge.

The project established three Water Conservation Areas (WCAs), one of which is the Loxahatchee National Wildlife Refuge. These areas are delineated in the Landsat images, clearly divided by the levees and canals. Also visible are the Big Cypress National Preserve, Everglades National Park, and Everglades Agricultural Area.

Another part of the project is the 100-mile-long eastern perimeter levee, a 3- to 6-meter high earthen berm built to prevent flooding of farmland and urban areas. It runs along the eastern edge of the WCAs, marking a clear separation between the WCAs and urban areas such as Miami, Fort Lauderdale, and Coral Springs.

Along with facilitating the further growth of the urban areas of greater Miami, the other upshot of the project was that the natural flow of water was interrupted, changing the hydrology of the region. The gradual sheet flow of freshwater is diminished, and instead sudden pulses of water are delivered by the canals. These sudden releases caused decreases in the numbers of fish species. 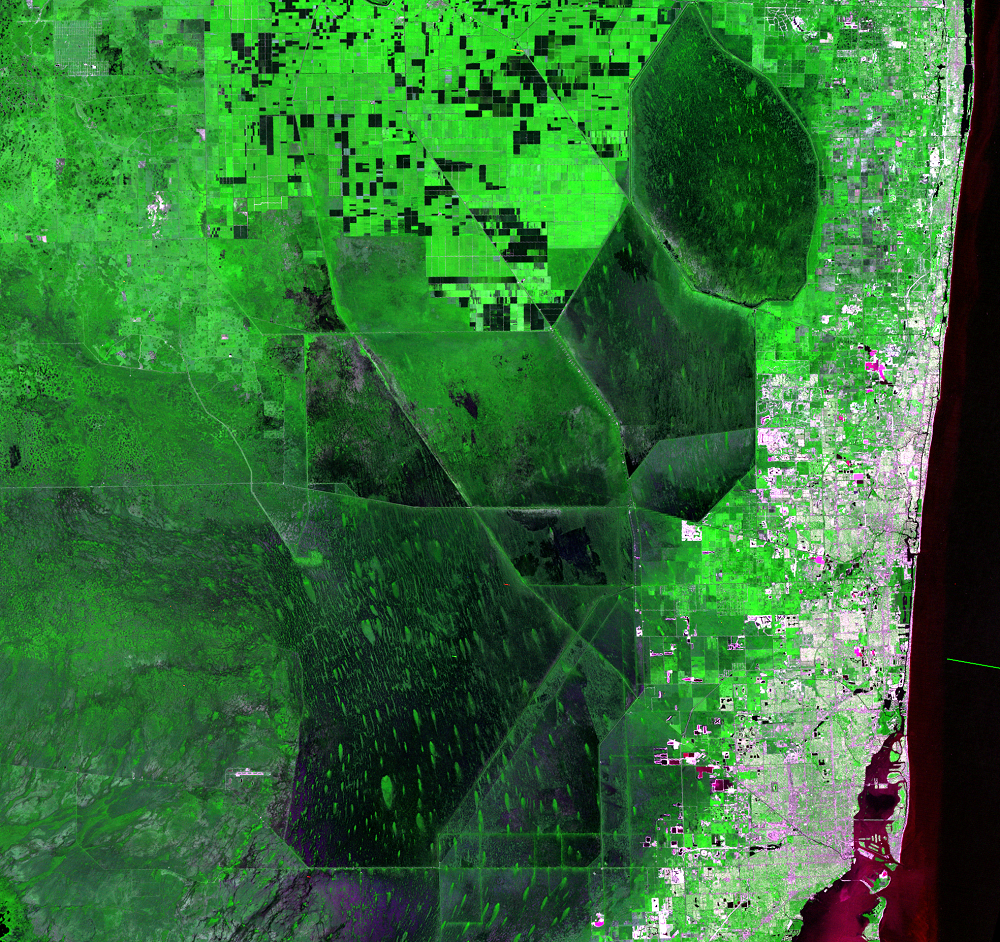 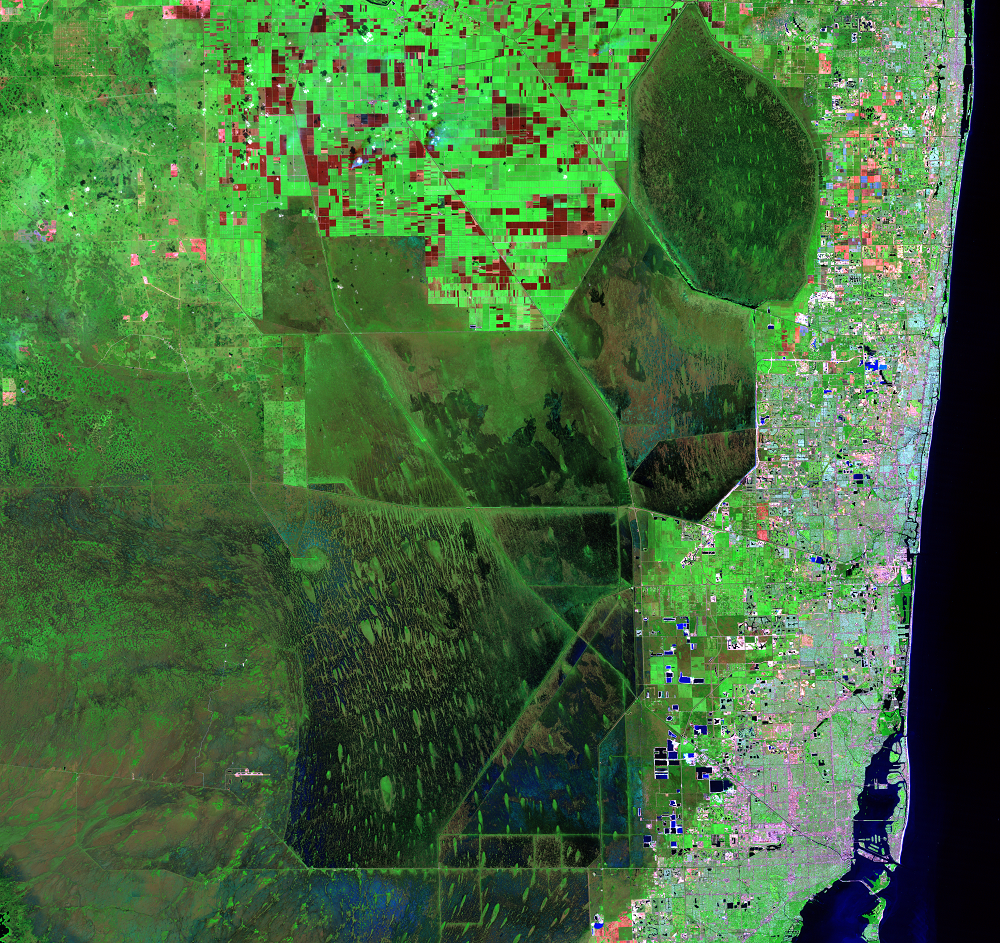 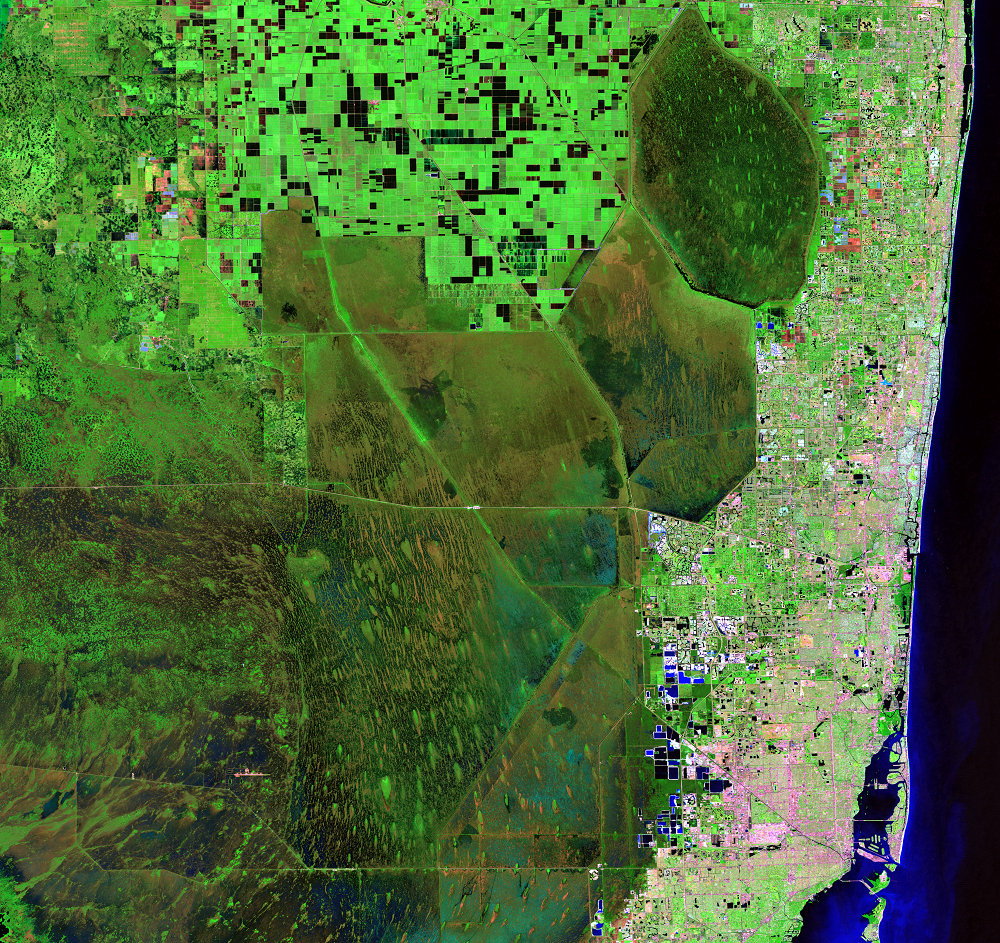 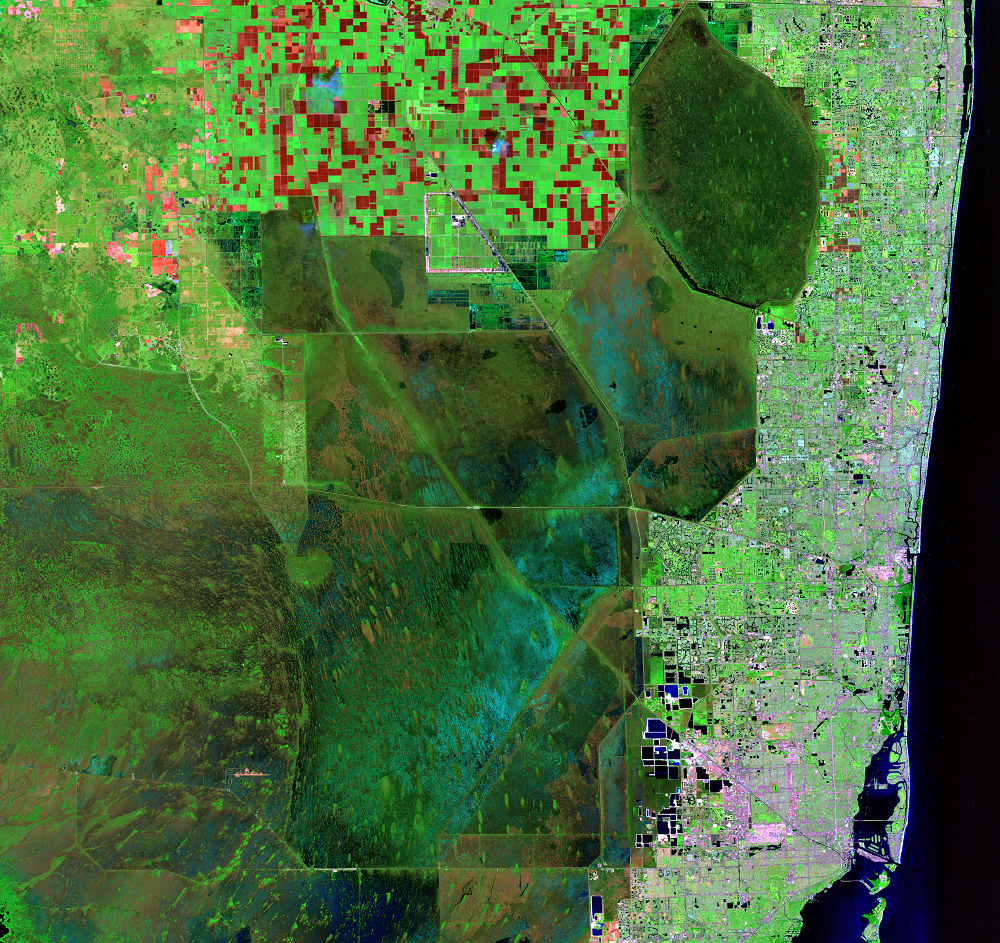 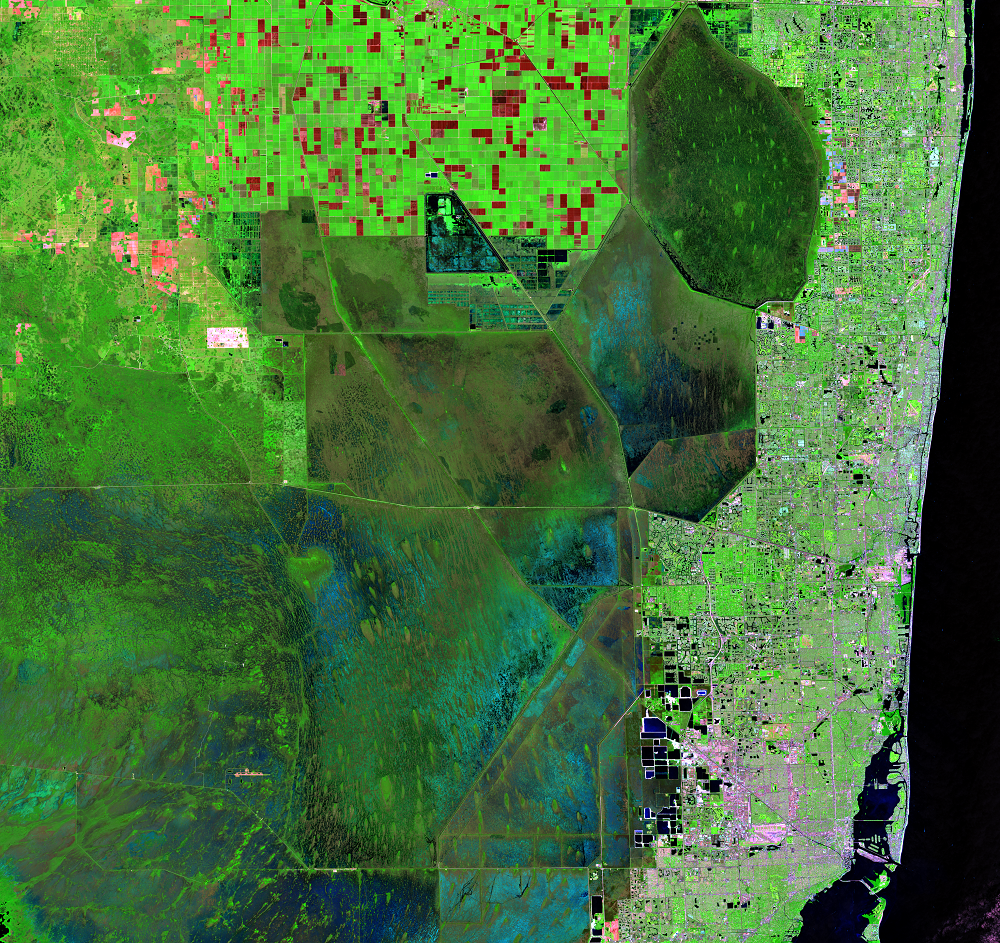 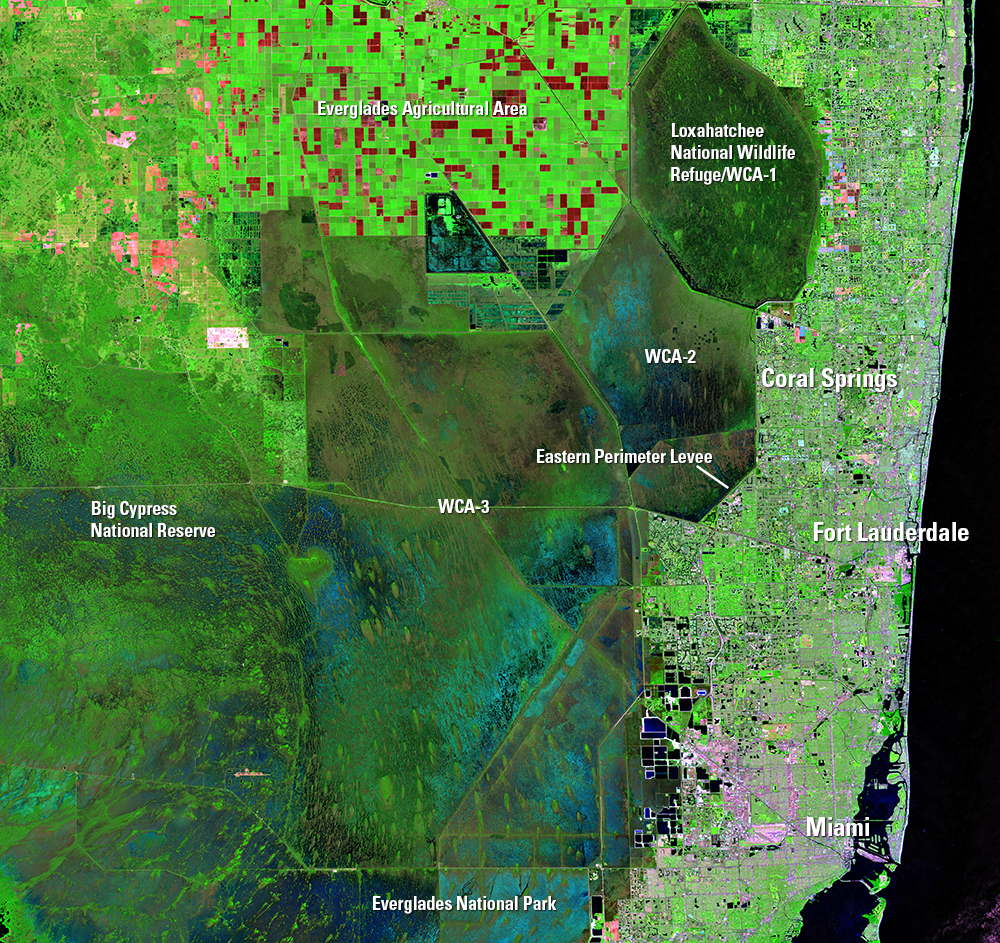 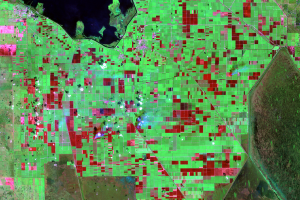 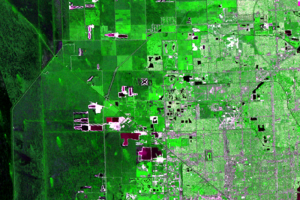 The Everglades sit on top of a bedrock of limestone. Limestone quarries, the dark rectangular shapes just west of the urban areas, provide about half ... 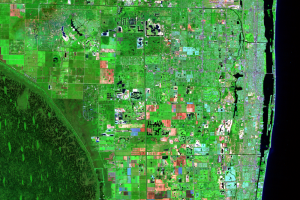 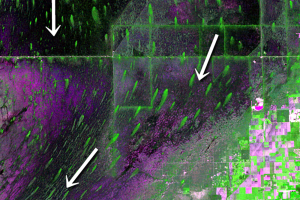 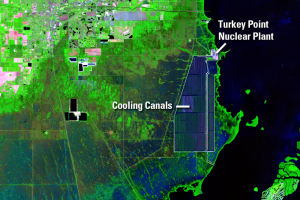 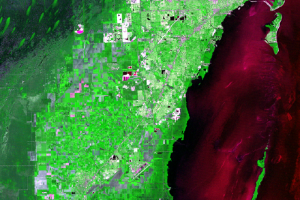 In 1900, southeastern Florida included a few small towns with a population of 3,592 people. Throughout the 20th century, Miami and other nearby towns ...