In southeastern Kuwait, on the coast of the Persian Gulf, a fascinating transformation is underway. It looks kind of like what you always wished you could build when making sand castles at the beach—an intricate interconnected moat in the sand with perfect circulation to keep the water from becoming stagnant. Only this is on a grander scale.

This is Sabah Al Ahmad Sea City, a city and marine ecosystem being built from scratch. Rather than build artificial islands in the sea to extend the country’s coastline, this project brings the sea to the desert.

Many Kuwaitis aspire to waterside living, and Sea City will provide such opportunities, effectively doubling the length of the country’s coastline. The project’s goal is for most residents to have direct access to a beach. Planners want the city to be the seafront destination of choice for Kuwait.

Sea City is eventually planned for a population of 250,000 and will have 200 kilometers of beaches. The city will also have yachting marinas and retail centers. When finished, Sea City will be about the size of Manhattan.

To build the city, canals are excavated out of the salty marshland. The excavated sand is washed and then used to build up the land for residential development. In fact, the land is being built up above projected sea levels to protect people and property from flooding.

This view also shows an expanding agricultural area along the Saudi Arabian border. In addition, other residential developments crop up in the inland desert areas over time. Just north of Sea City is the Al Zour thermal power plant. This gas-fired power plant and desalination plant were completed in late 2016.

(Black stripes run through some of the images because of the Scan Line Corrector failure on Landsat 7 in May 2003.) 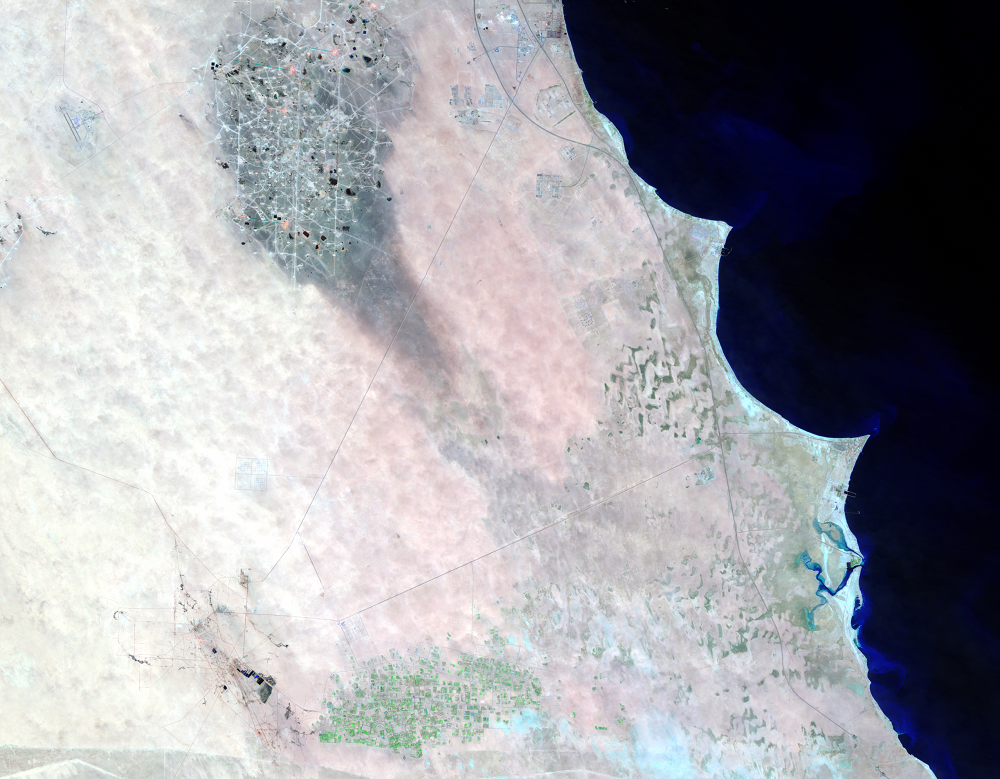 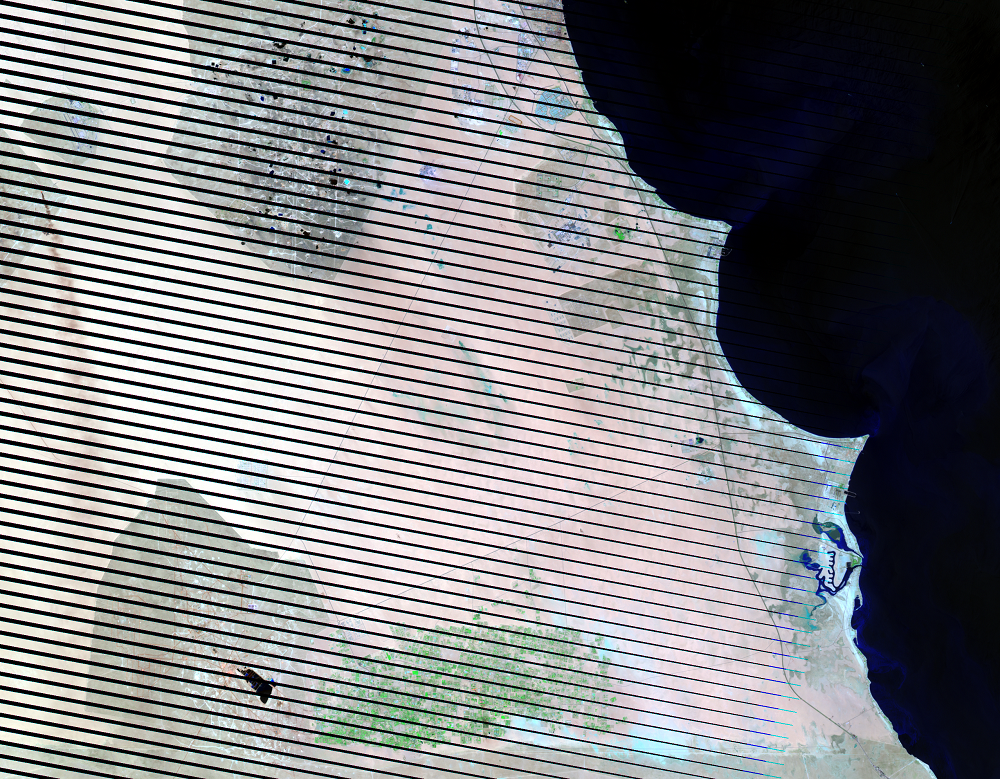 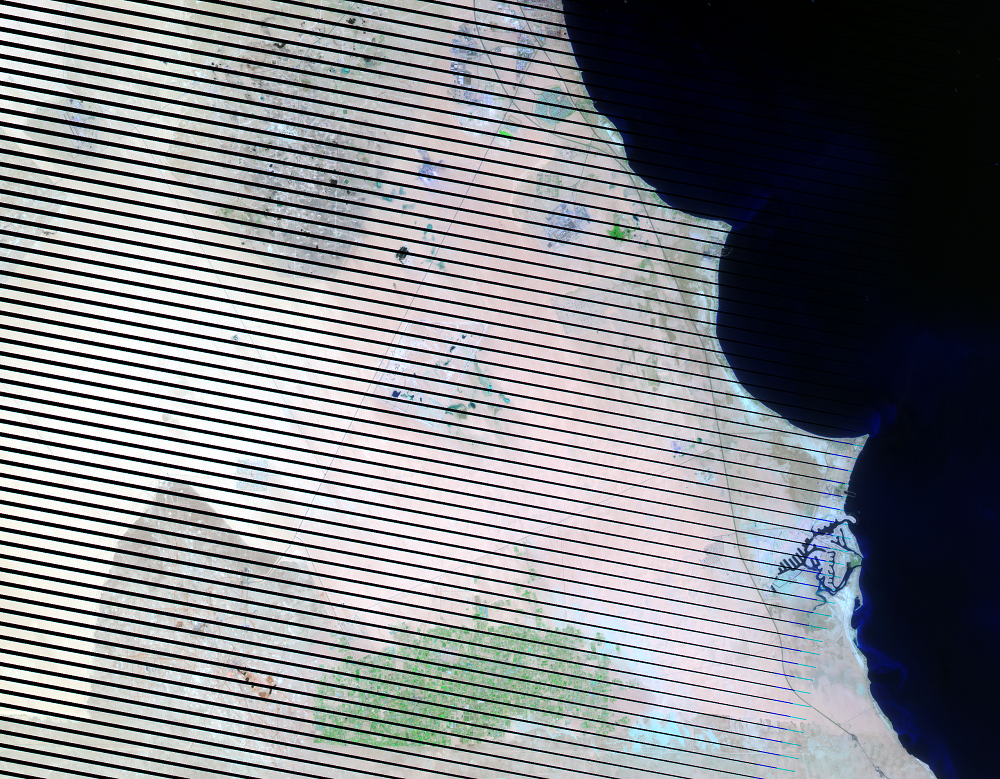 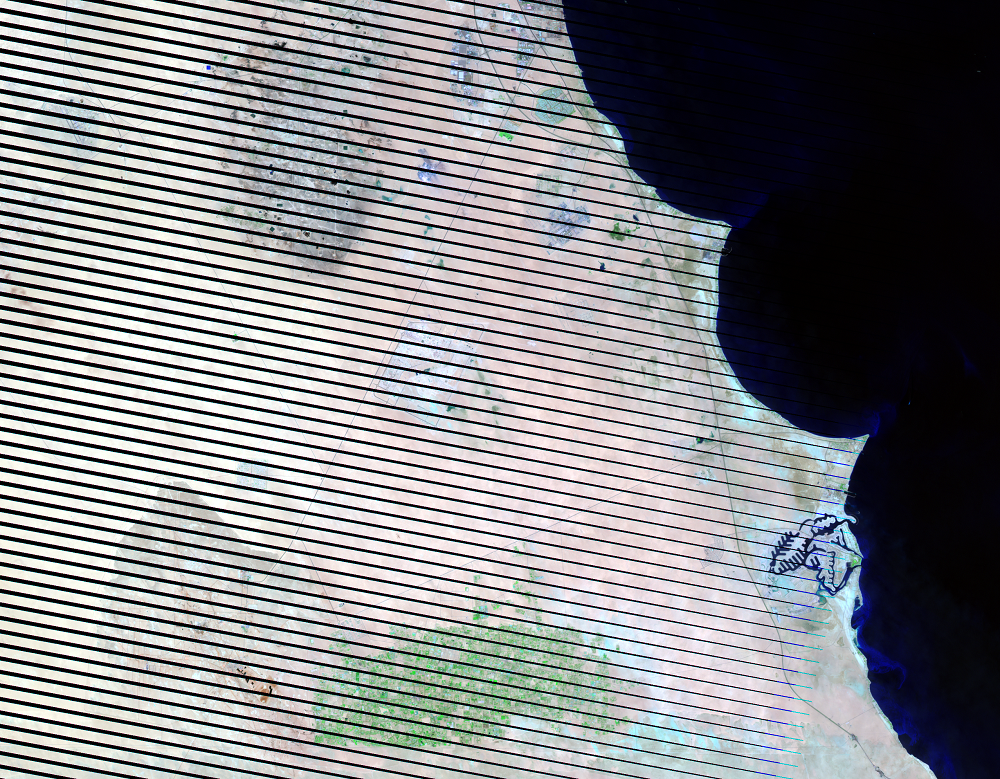 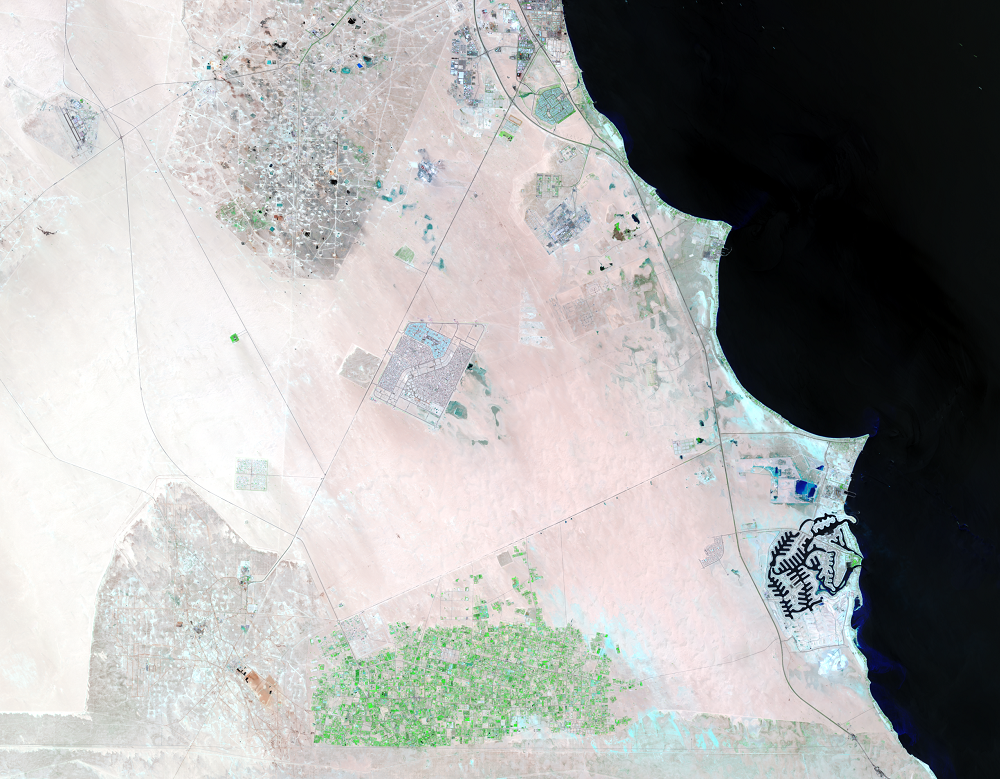 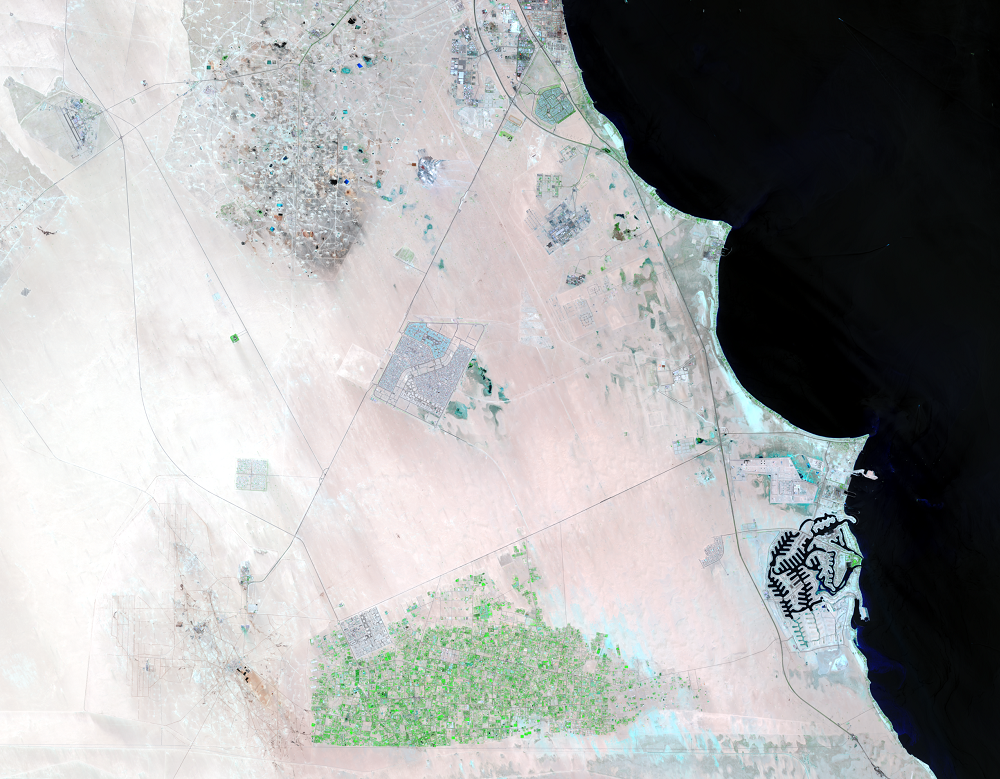 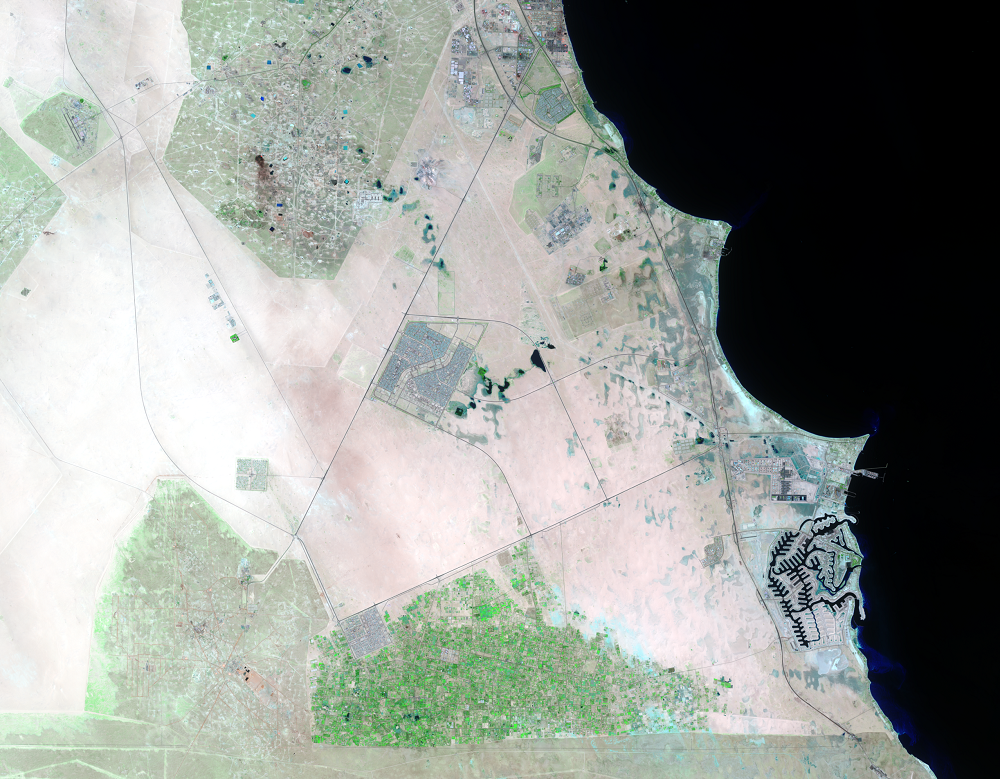 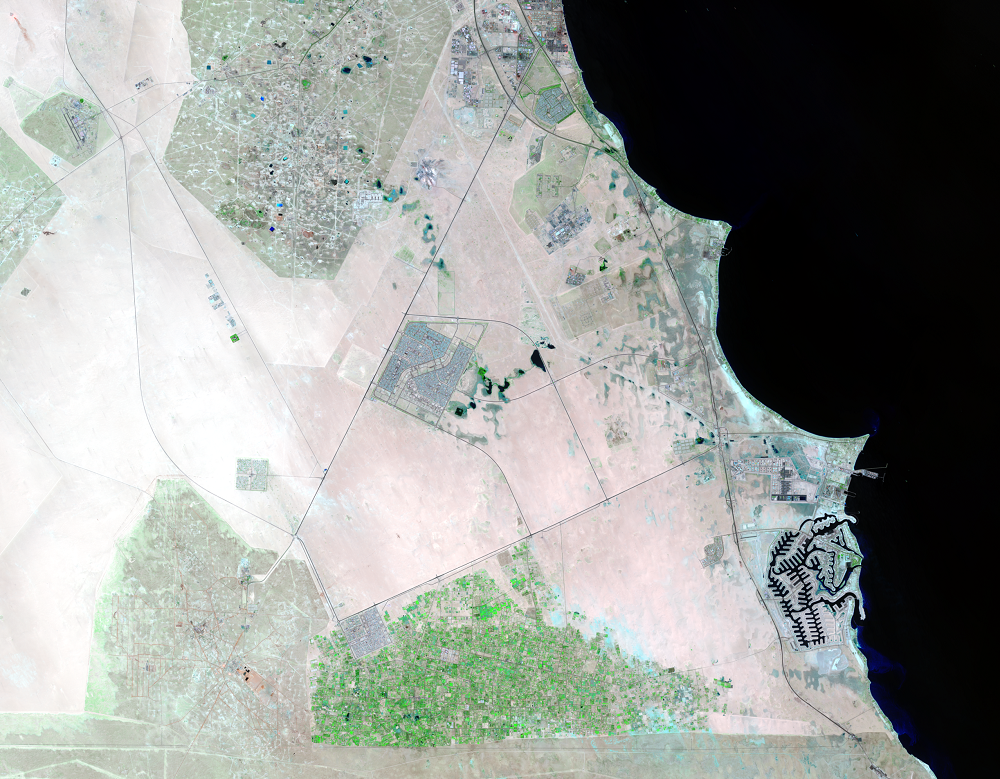 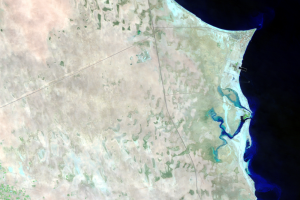 Bringing the Sea to the Desert

Building Sea City is a massive and challenging engineering project that requires constant innovation. As seen in the 1994 image from Landsat, the area... 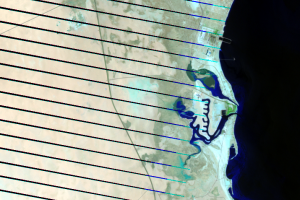 Continuous testing of the seabed and water takes place during and after construction of each phase of the Sea City project to monitor the condition of...