One of the first flood-control measures involved the railroad causeway, a solid raised roadway cutting east to west across the lake. The first transcontinental railroad, completed in 1869, had to go around the lake and over the Promontory Mountains to the north. In 1902, the Southern Pacific Railroad constructed a new line directly across the lake so that engines would not have to climb over the mountains. For 12 miles, this route crossed a trestle, like a low bridge, made of 28,000 wooden pilings. In 1957–1959, this trestle was replaced by the causeway—a solid raised roadway made of 50 million cubic yards of rock, sand, and gravel. This causeway was safer and allowed faster speeds.

But unlike the trestle, which allowed water to circulate freely underneath for 12 miles, the causeway had only two 15-foot culverts. The causeway was constructed of semipermeable material, which reduced north-south flow and split the lake into two parts. The south part received most of the lake’s inflow from rivers, so it became higher than the north part. The northern part also became saltier, causing different types of algae and bacteria to grow, which made it look pink, while the southern part of the lake remained bluer. You should be able to see this subtle difference in the 1972 Landsat image (in this image, reflectance in the visible-red range is represented by green).

By July 1, 1984, after two years of above-normal precipitation, the south part of the lake was 3.7 feet higher than the north, the highest difference it would ever reach. By August 3 of that year, a 300-foot section of the causeway was replaced by a low bridge, allowing water to flow underneath. Within 2 months, the difference between the south and north fell to 0.75 feet, and within a year it was only 0.5 feet. Although this was done as a flood-control measure, it also had the effect of reducing the difference in salt concentration. By 1987, the north-south difference visible in Landsat images was reduced.

Once the levels began dropping again, a clear color distinction between the north and south arms of the lake returned. 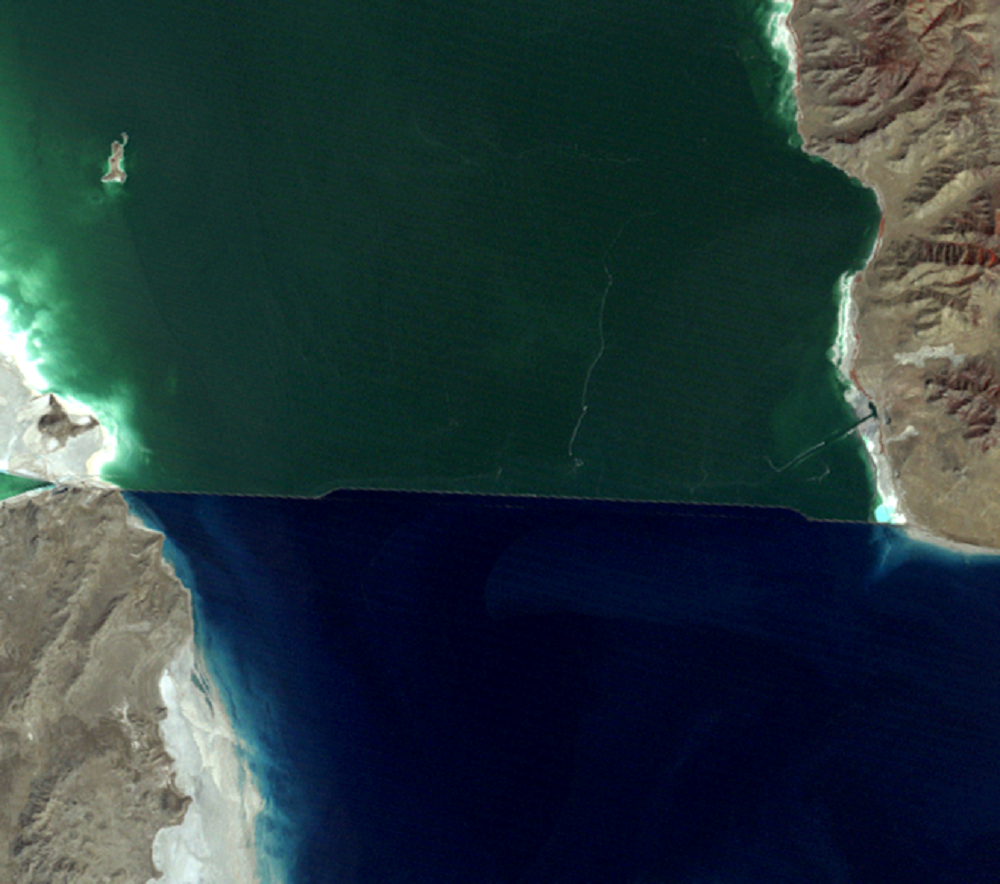 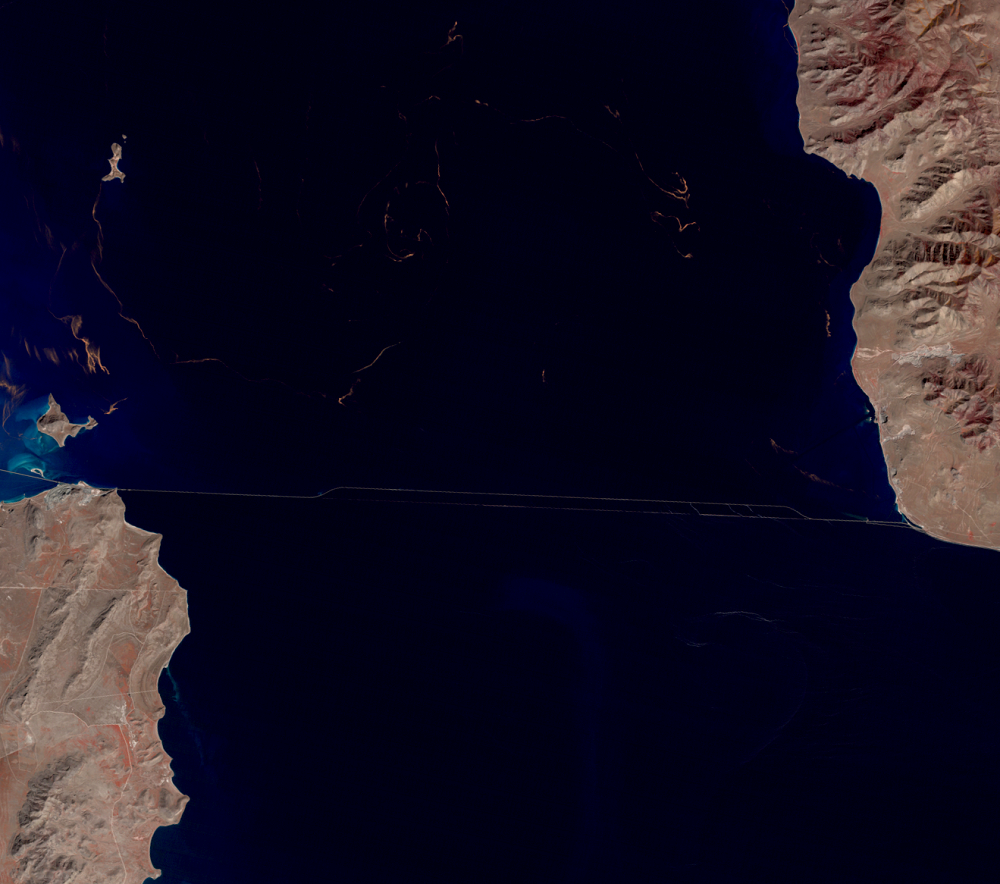 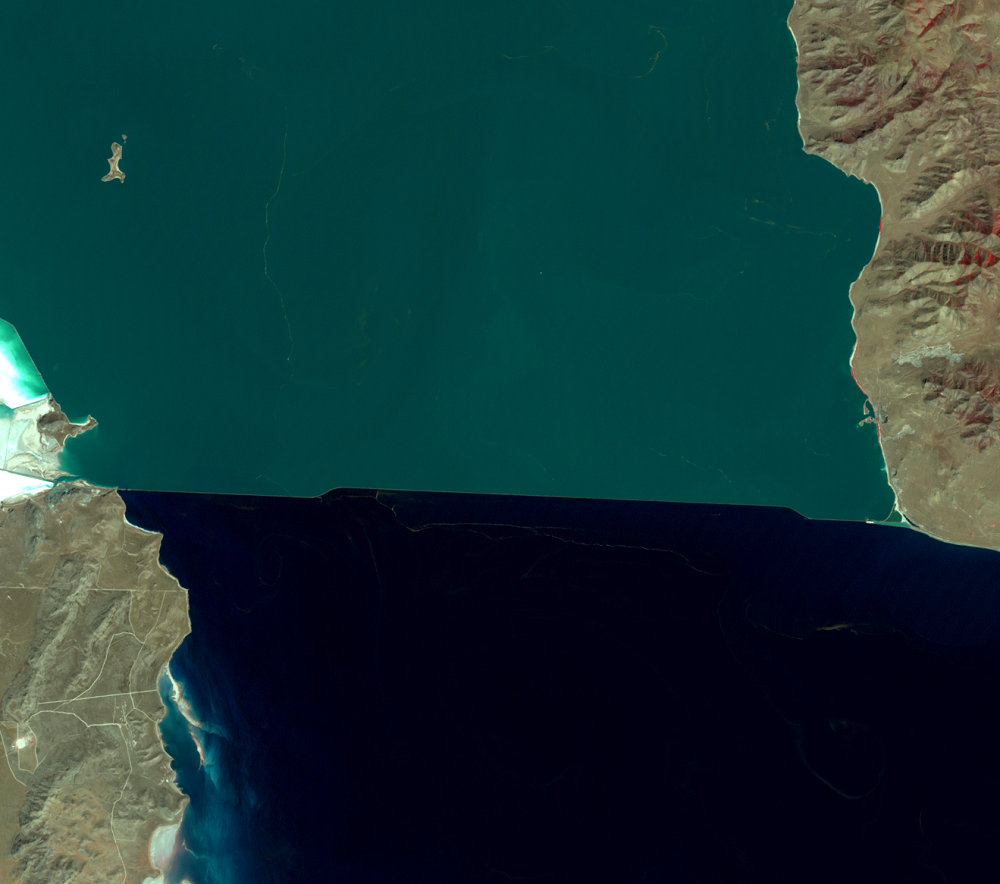 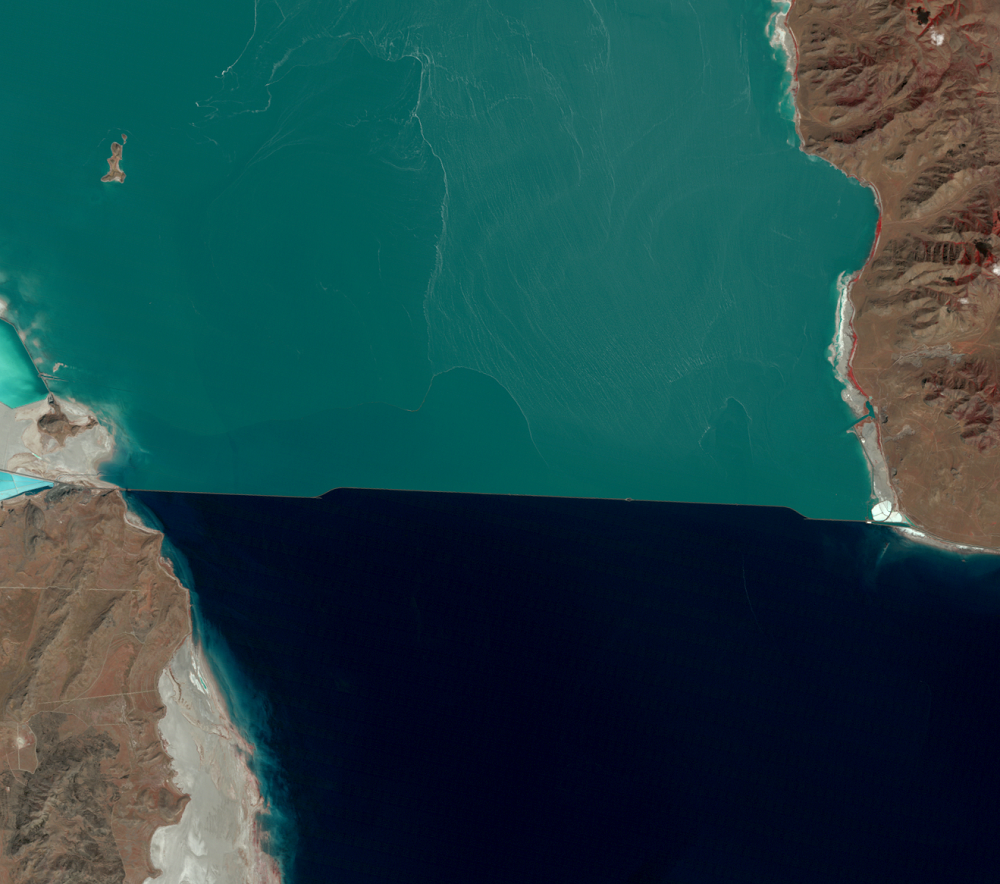 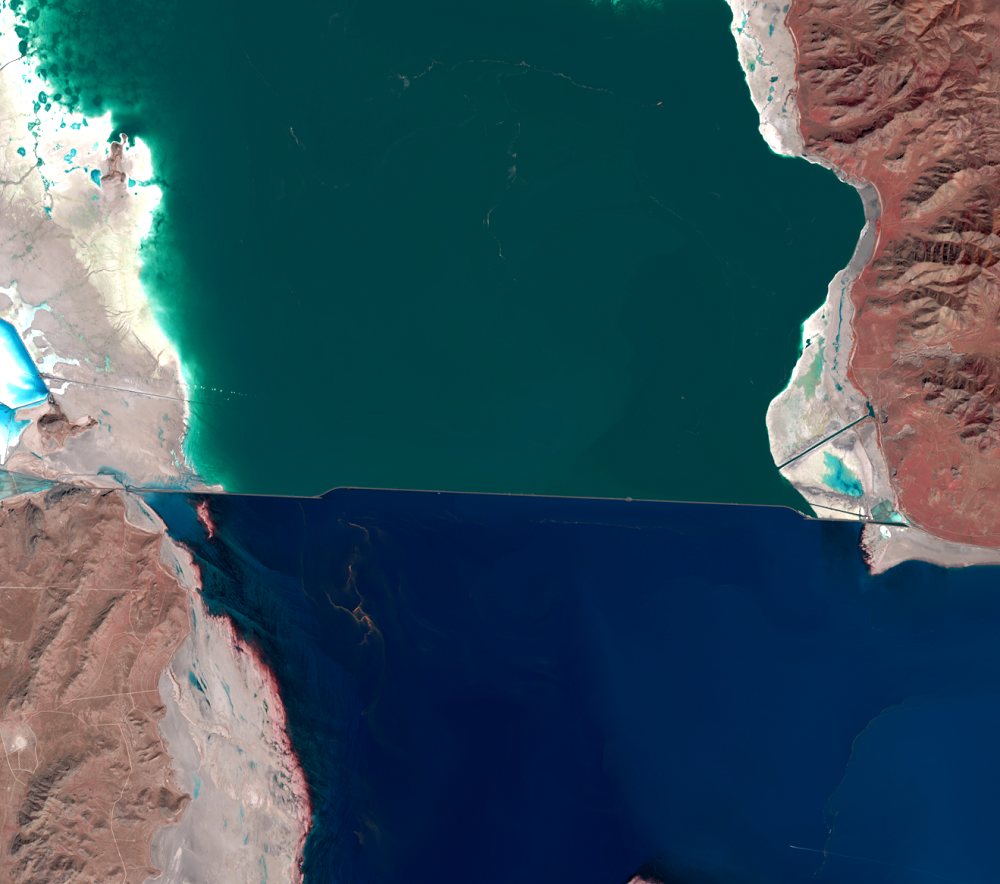 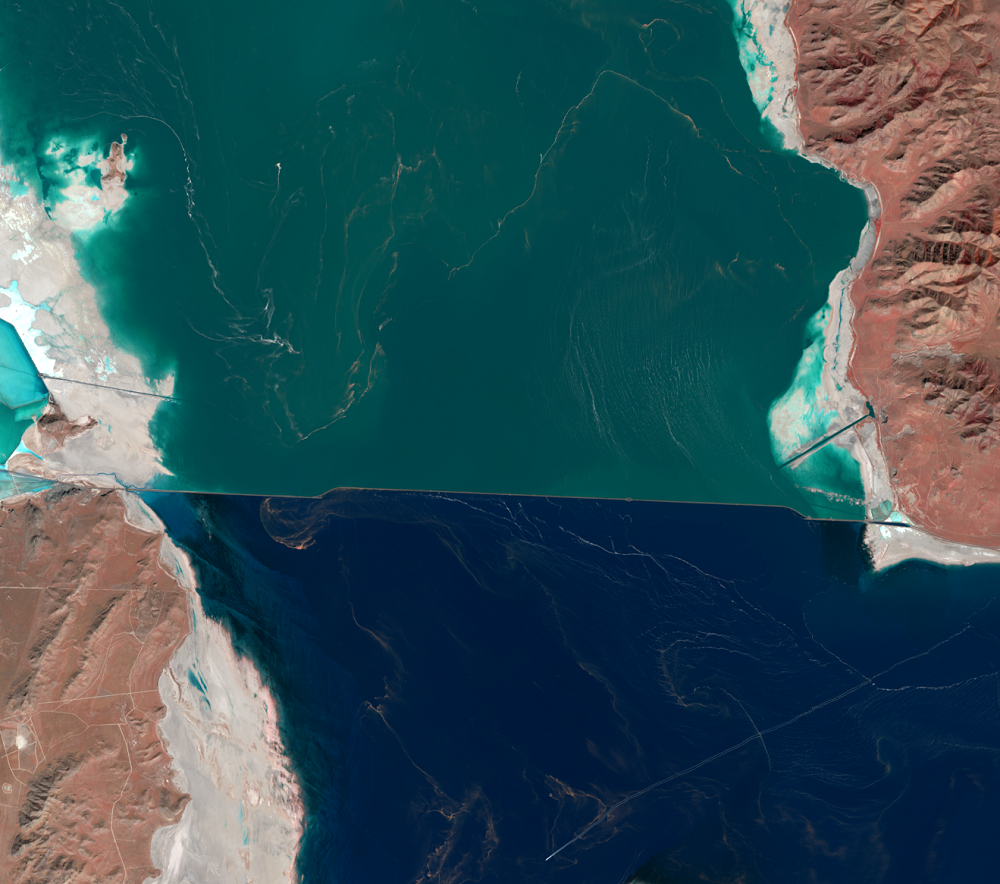 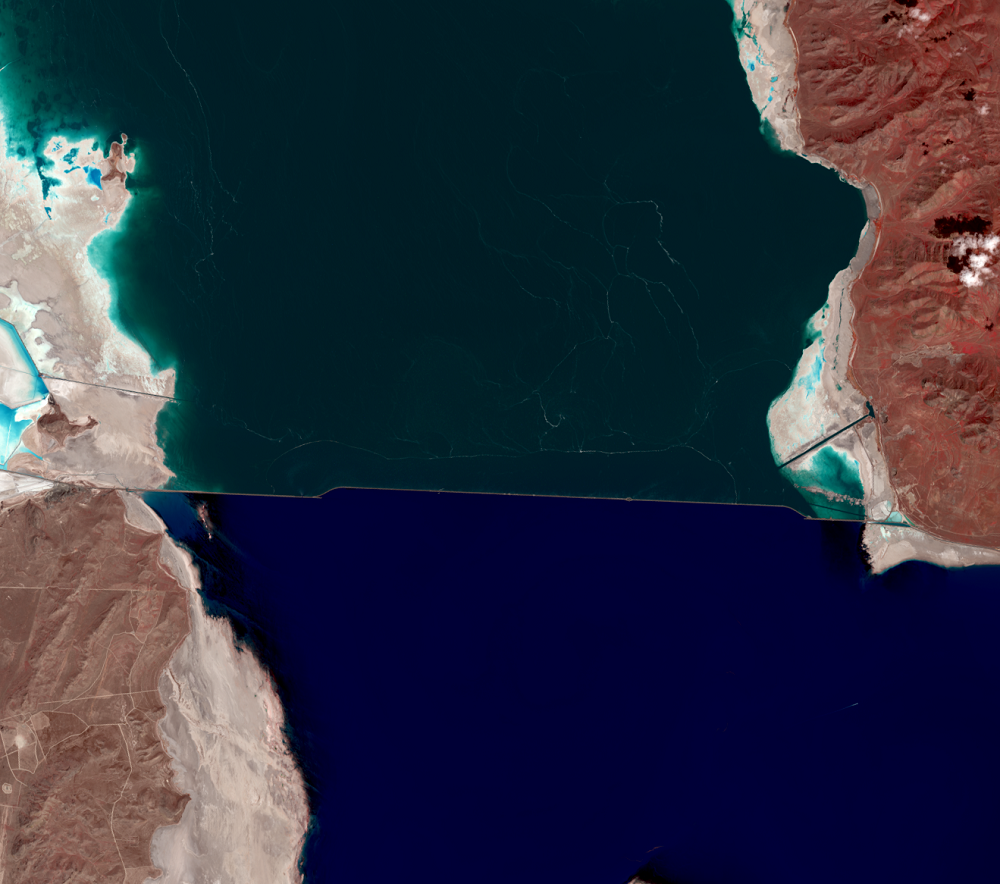 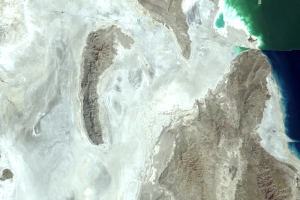 In June 1986, the State of Utah began construction of a system to pump excess water from the lake onto the Bonneville Salt Flats, creating the Newfoun...