A large outbreak of gypsy moth (Lymantria dispar) caterpillars attacked the hardwood forests of the northeastern United States in 2016. A fungus (Entomophaga maimaiga) introduced from Japan has kept gypsy moth populations at relatively low levels since the late 1980s. However, abnormally low rainfall during May and June in 2014, 2015, and 2016 reduced the effectiveness of the fungus, resulting in the worst outbreak seen in New England in over 30 years.

Gypsy moth caterpillars devour the leaves of hardwood trees, causing the greatest damage in late June as the larvae reach maturity. While the gypsy moth caterpillars thrived in the 2016 drought conditions, this spring's rainfall made the fungus effective again and caused high levels of mortality. However, mortality reached a peak at the end of the larval stages, after the caterpillars had already caused most of the damage. Oak-dominated forests in Rhode Island and eastern Connecticut were hit particularly hard this year.

Valerie Pasquarella, a Postdoctoral Research Associate at the University of Massachusetts Amherst, is using Landsat data to track the spread of the outbreak and monitor defoliation. She compares newly acquired Landsat observations with long-term average conditions derived from Landsat time series to detect changes in vegetation greenness in near-real time.

Individual near-real-time assessments can also be combined to produce wall-to-wall assessments of average potential damage over the course of the growing season. In these season-integrated maps, blue indicates forest conditions that are within the normal range of variability, while yellow, orange, and red show decreases in vegetation greenness indicative of defoliation. The 2017 image is preliminary and represents an averaged view of the potential damage as of August 1.

While Landsat has not typically been used to monitor insect outbreaks in near-real time, new analytical tools along with the open access to Landsat data make it possible to quantify insect damage over a large area at a level of detail not possible with aerial surveys alone. 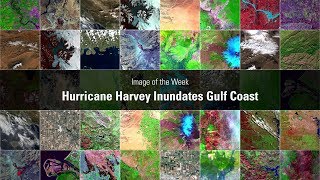 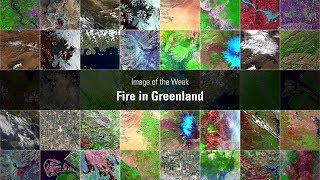