Is Louisiana falling into the sea, or is the sea inundating Louisiana? It’s actually a bit of both. To the inhabitants of a tiny island on the bayou, an island getting tinier by the day, it hardly matters. They just know their home is gradually becoming uninhabitable.

A USGS report estimates that Louisiana, which experiences more coastal wetland loss than all other states in the conterminous United States combined, lost 5,197 square kilometers (2,006 square miles) of land from 1932 to 2016.

A combination of factors is causing this coastal land loss. Marshland, which historically served as protection against storms, has been carved up for oil and gas production activities. The marshland is then open to saltwater intrusion. The low elevation of the region makes it especially vulnerable to sea level rise.

These factors have an immediate effect on the Biloxi-Chitimacha-Choctaw community on Isle de Jean Charles, about 75 miles south of New Orleans. The island has lost 98 percent of its landmass since the 1950s. Once 5 miles wide and filled with lush cypress groves and cow pastures, barely a half-square mile of the island remains above water.

A variety of images created from data archived at the USGS EROS Center shows how the island and the surrounding delta have changed. Landsat’s 30-meter resolution shows the land loss to the wider delta region over time. Complementing those images are a high-resolution aerial photo from 1963 and a Sentinel-2A image, which shows much more open water in 2017. In the aerial image, open water is the darkest gray and black tones, but in the Sentinel-2A image, open water, represented by blue-gray tones, encroaches on the small island. 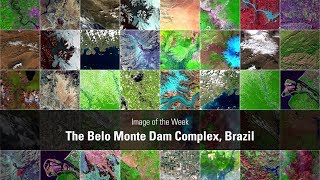