The tornado touched down on a Monday evening, June 18, 2001, about 5 miles west of Siren, a town of about 900 people. This tornado was later classified as severe, an F3 on a scale from F0 to F5, its winds of 158–206 mph placing it among the 10 percent most damaging tornadoes.

As a lakeside town, Siren had many houses without basements, and it had short warning that night since lightning had knocked out its tornado siren about a month earlier. The tornado hit the town at about 8:20 p.m., damaging or destroying about 200 houses (2) (3) and 40 businesses. No one died in Siren, but 16 people were injured that night, and three people were killed east of Siren in the small town of Dewey. This was Wisconsin’s deadliest tornado since 1984.

Just before noon the next day, as recovery crews poured into the area, Landsat 7 passed overhead, getting a nearly cloudless image. The Environmental Remote Sensing Center at the University of Wisconsin rush-ordered this scene from the USGS and produced a “change” image comparing May 18 to June 19. This image gave recovery workers a more synoptic view of the damaged area than attempts to map it by airplane, helicopter, or ground survey.

Thanks to Dr. Thomas Lillesand, Marcia Verhage, and Nancy Podger of the Environmental Remote Sensing Center of the University of Wisconsin, Madison, for assistance. 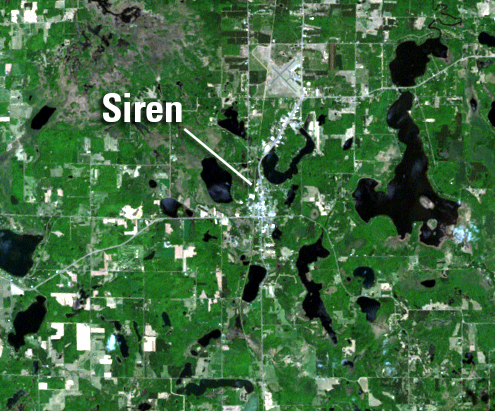 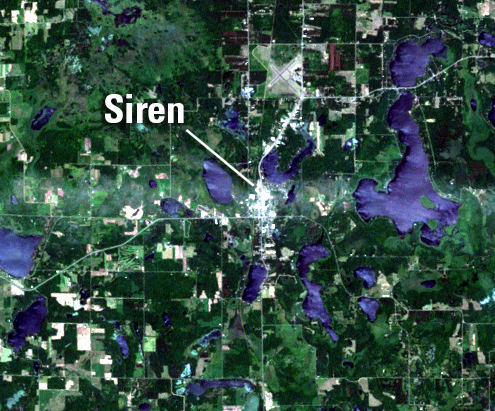