It is not completely understood how and when icebergs calve from Antarctic ice shelves. Besides hinging and creeping, calving may also be caused by storms, ocean swells, and collisions with large icebergs. The Filchner Ice Shelf may calve only once or twice a century the way it did in 1986, with little loss in between these major calvings. It moves about 1.3 km/year—fast for an ice shelf—and in the 1986 calving it shed about 40 years’ worth of advancing ice.

The calved ice broke into three large icebergs, named A22, A23, and A24. A24 was about 90 km by 95 km in area and about 400 m thick. All three soon grounded in the shallow sea floor just off shore. But the wind, currents, and tide kept slowly dragging the icebergs, gouging out underwater tracks that were visible by ships’ sonar.

In early 1990, A24 left its siblings behind and broke free into the deep ocean. The map of Antarctica shows its path. Because it was 400 m deep, it was less affected by wind and surface currents and more affected by deeper currents, which are harder for oceanographers to track. The Weddell Sea Gyre is such a current, running clockwise around the Weddell Sea at about 2.5 to 3 km below the surface. (A gyre, pronounced “jire,” is a circular or spiral movement.)

A24 was carried by the Weddell Sea Gyre through 1991. Most icebergs would then continue with the currents eastward, along a submarine ridge which runs from the Antarctic Peninsula to the South Orkney Islands and on toward South Africa. But there are gaps in this ridge, and water “jets” through them; one of these jets carried A24 through a gap and north into the Atlantic Ocean.

By shooting through the gap, A24 had left the cold waters that circle clockwise around Antarctica (the Circumpolar Current). The warmer waters of the Atlantic doomed A24; as it passed the Falkland Islands the melting, wind, and waves broke it into four pieces, which continued along the coast of South America. Smaller icebergs like these can actually be more dangerous to ships because they are harder to detect on radar.

everal countries operated on the Filchner during the 20th century, building bases such as the Ellsworth, General Belgrano, and Shackleton. Druzhnaya 1 was the last, operated by the Soviet Union each austral summer from 1975 to 1986. When the A23 iceberg calved and floated off that winter, Druzhnaya 1 was still on it.

In February 1987, the Soviets visited one last time, approaching the offshore iceberg in the ship Kapitan Kondrat’ev and collecting their equipment from the abandoned base. 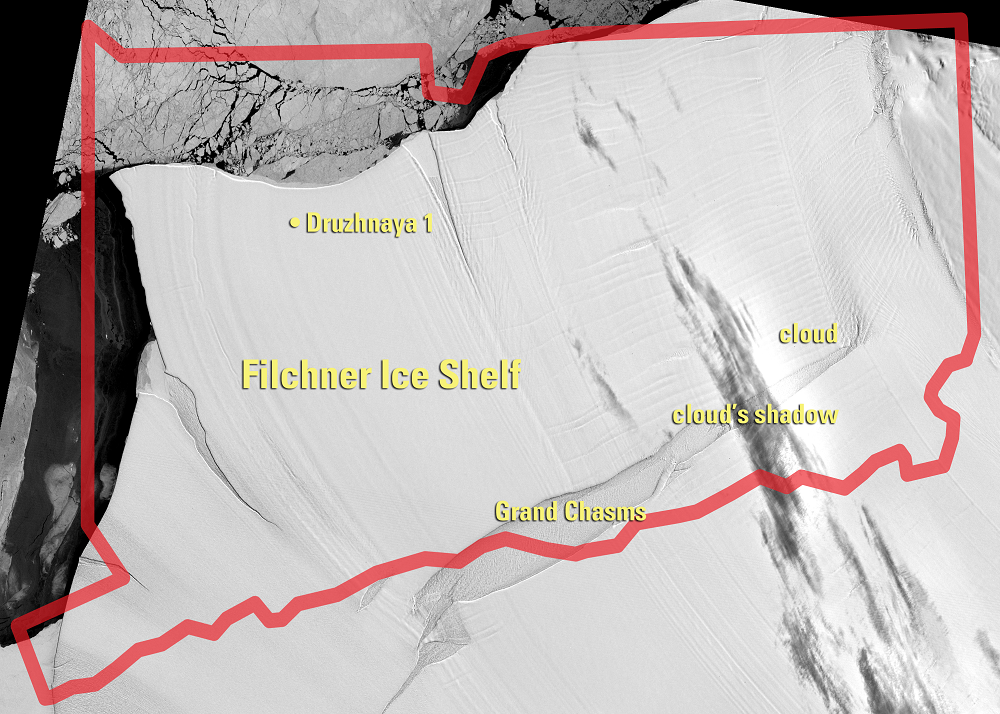 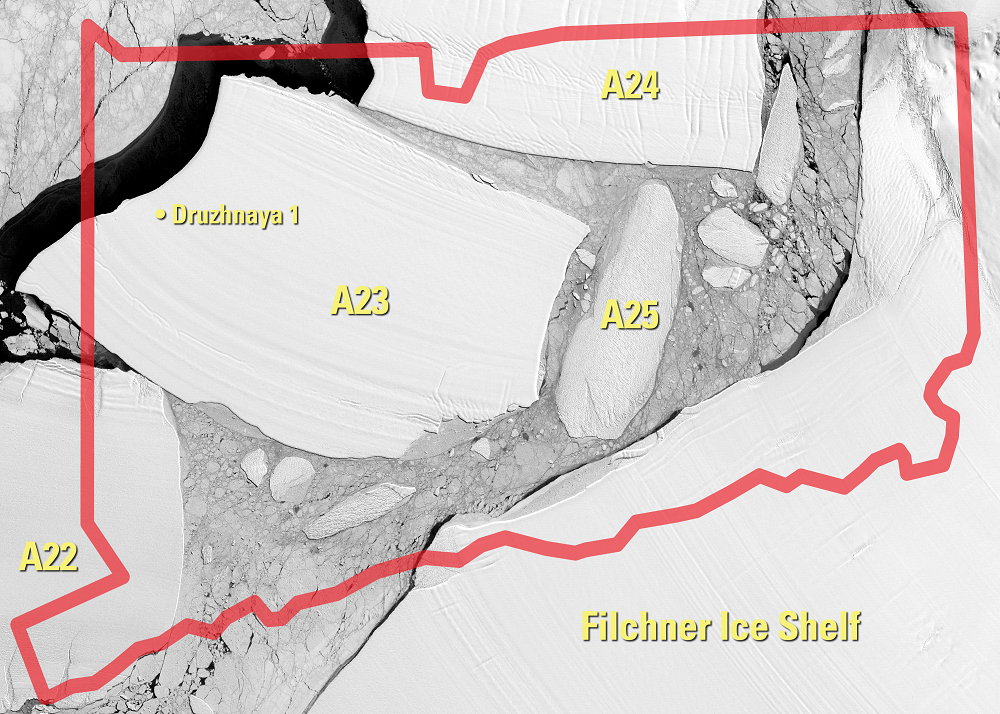