The revised Statue 2477 (RS2477) was enacted by Congress in 1866 to facilitate western settlement.  It granted “the right-of-way for the construction of highways across public lands not otherwise reserved for public purposes…” There was no requirement to legally record the right of way. Mere existence and use of the road established a legal right of way.   This statue was repealed in 1976 with the provision to honor “valid existing rights.” Legal disputes have ensued regarding what routes qualify as a valid existing right of way.

This project involved several “RS2477” routes in Kane County, Utah. There were 2 major requirements: (1) To identify the routes on historical aerial photography; and (2) to measure the widths of visible routes to see how the widths on the photography compared to today’s measurements in order to determine whether a route qualified as an RS2477, and if so, what width of right-of-way should be granted and recorded. 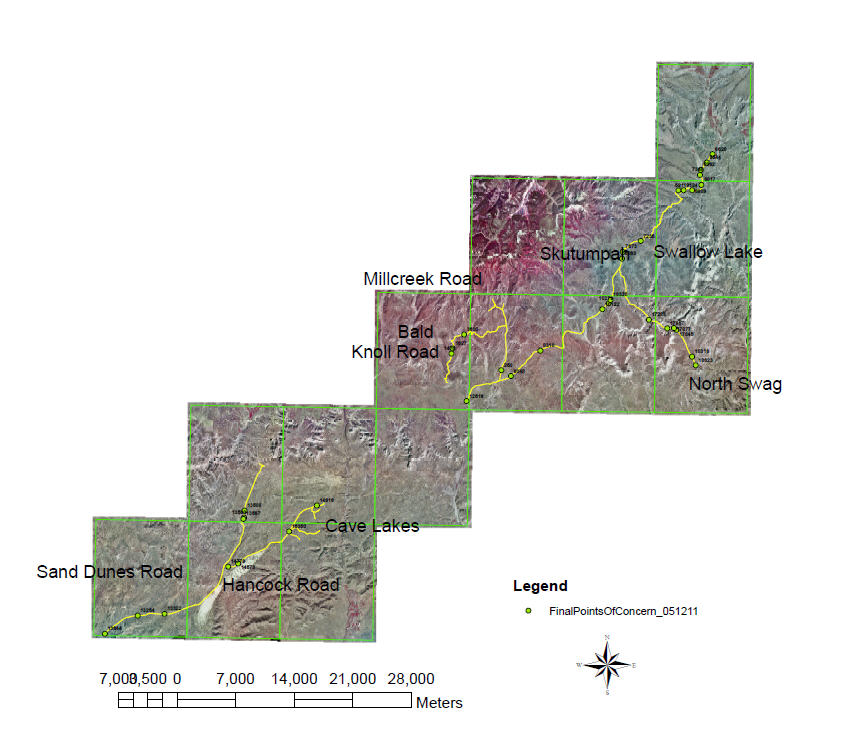 Each route was manually interpreted from aerial photography stereo pairs ranging from the 1940s to mid-1970s. Some routes had 4-5 dates of coverage. The entire length of the route was assessed as whether it was: (1) visible, (2) questionable presence, or (3) not visible. For every portion of a route where there was an area of questionable visibility or no visibility, a graphic was put in the report showing the area’s detail and an explanation.

In addition, the road width was measured in ArcMap for 400 random sample points taken along the routes.  The measured width was compared to the latest county provided width measurements.  Points that deviated significantly from the historical photography to the present were tagged as “points of concern.” At each Point of Concern the route was either non-existent or much narrower than today’s measurements. These points were addressed in the court proceedings. A final report was prepared for the courts that included all the aerial photo evidence and route widths measurements made from the aerial photos.