Bering Land Bridge National Preserve and Cape Krusenstern National Monument encompass approximately 1,600 km of predominantly soft-sediment Arctic coastlines rich in biological resources. These shorelines include lagoons with intricately patterned interiors, estuaries serving as key waterbird breeding areas, extensive salt marshes and brackish wetlands, and sediment transport-driven barrier islands and capes. Over the past decade, marine vessel traffic through the Bering Strait has grown exponentially to take advantage of new ice-free Arctic summer shipping routes. Given the proximity of shipping and nascent industrialization to these formerly remote conservation units, the NPS seeks preparation for spill response, mitigation, and restoration. A major unmet need in the parks’ coastal strategic plan is a detailed ecological lands classification of coastal vegetation based on geomorphologic and vegetation units defined through remote sensing and fieldwork. This project is expected to run through 2018–2019 and will result in geospatial data layers presenting the coastal classification as well as high-resolution imagery that, following its use in the classification, will be available as base-line data for spill response, restoration, and other purposes.

High-resolution WorldView-2 satellite imagery was classified through object-oriented mapping to provide input to the coastal vegetation map. The workflow included segmenting the imagery and capturing attributes using ArcMap tools, with the data output into open-source programming language files for classification. Images were segmented to a minimum size of 200 m2. For each segment, the team captured the mean spectral attributes (including derivatives such as Normalized Difference Vegetation Index), elevation and elevation-derived attributes (such as slope and aspect), along with spatial attributes.

Each satellite scene was segmented and classified separately, with training data from vegetation plots or photointerpretation points. The training dataset consists of 400 plots collected for this project, 107 long-term monitoring plots, and several thousand photo-interpreted points. Instead of manually drawing polygons as training data, many points were quickly placed and assigned to vegetation classes based on interpretation of the imagery. The segment the point landed on was then assigned that class, and its data used to train the model. Multiple classifiers such as K-Nearest Neighbor, Gradient Boosting, and Support-Vector Machine were tested, with Random Forest being the most accurate and fastest. For each scene, a separate Random Forest model was built in order to exclude irrelevant vegetation types and account for spectral differences in satellite imagery. The Random Forest out-of-bag error for each scene ranges from 8.59% to 15.88%. Once completed, a data report and spatial layers of the geomorphological and vegetation maps will be available at https://irma.nps.gov/. 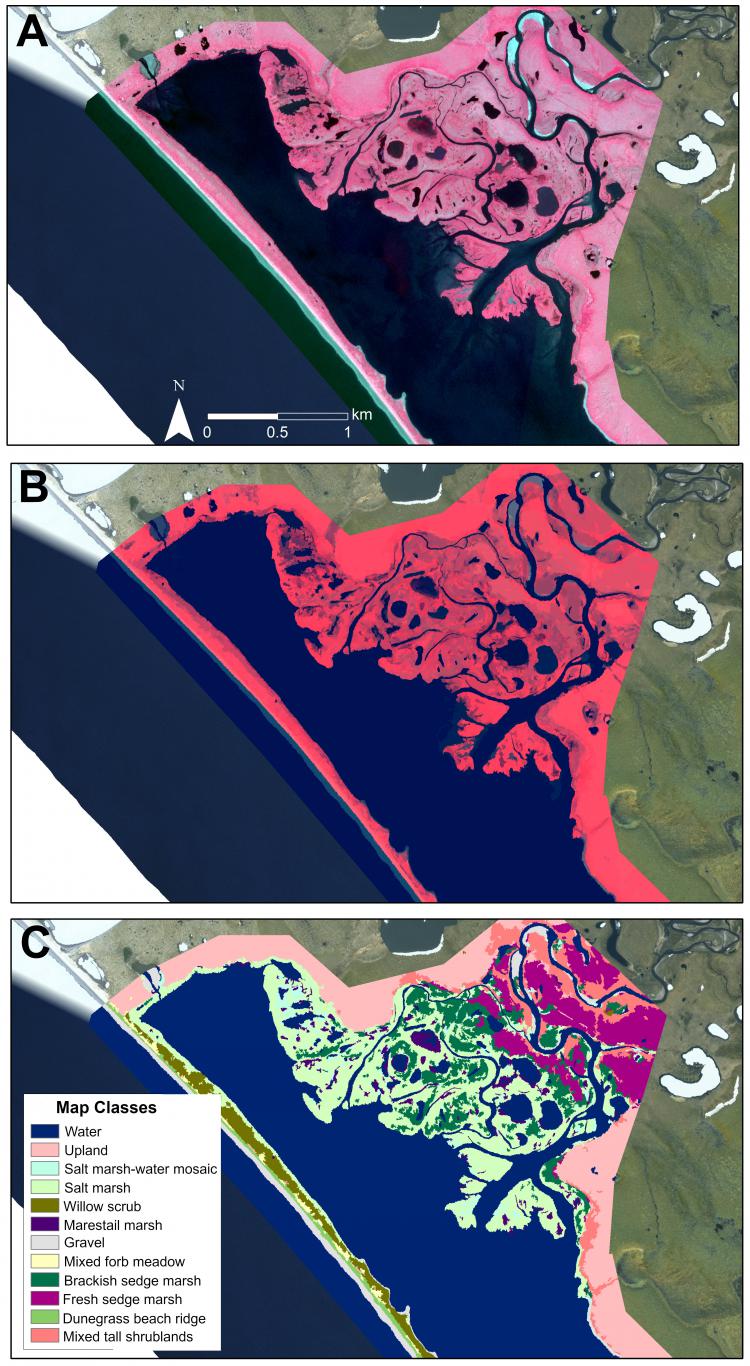