Underground coal mine fires are widespread and pose a threat to both human and environmental health that can result in large economic loss, but they are generally underreported. Traditional mapping and monitoring of coal fires within the United States has primarily relied on costly field-based or airborne data, which are time and labor-intensive.  The OSMRE is investigating the use of remotely sensed satellite data to identify problematic coal fires.

Thermal infrared radiation (TIR) data from imagery acquired by Landsat 7 and Landsat 8 have been used in attempts to detect surface thermal anomalies associated with underground coal mine fires at multiple locations in both the Western and Appalachian regions of the U.S.  As a coal seam burns underground, heat is transferred to the surface by conduction and convection, thereby creating a diffuse zone of elevated temperature over the active fire. While the remotely sensed estimated surface temperature is typically lower than the absolute surface temperature measured on the ground, the observable difference between the thermal anomaly and ambient background temperatures allows for delineation of the fire area. Detection and accurate delineation of underground fires is obtained by resampling the 60-m TIR data to 30-m spatial resolution. Implementing a threshold method to extract hotpots from Landsat 7 and 8 TIR bands has shown a positive correlation between remotely sensed products and ground-based survey data. This methodology has been encoded onto the cloud-based geospatial platform Google Earth Engine (GEE), which facilitates rapid analysis of archived imagery. The GEE model also allows rapid and replicable detection of new fires using Landsat data. 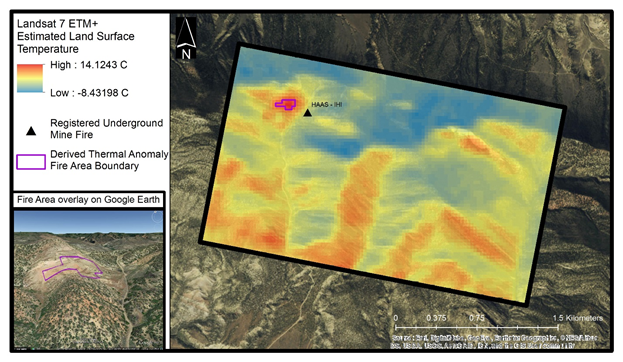