Across vast areas of BLM-managed western lands, prehistoric surficial rock features such as tipi rings, medicine wheels, cairns, and other ambiguous rock arrangements have lain in situ, undisturbed for hundreds or thousands of years. Given the difficult terrain and remote locations many of these sites occupy, many of these features are either undiscovered or, at the least, undocumented.

BLM has statutory obligations to identify and preserve these sites of cultural significance. To accomplish this, BLM staff used an unmanned aircraft system (UAS) platform to collect images and create orthorectified 1-centimeter (cm) ground sample distance (GSD) mosaics and digital surface models (DSM) over approximately 250 acres of BLM-managed land in the Absaroka Mountains near Cody, Wyoming. The area has known prehistoric rock features and is suspected to contain an abundance of previously unknown features.

Traditional archaeological field surveys involve painstakingly canvassing an area on foot in a systematic way to locate, define, sketch and document features of interest – a process that can take weeks to cover 250 acres of high feature-density like this site near Cody. In contrast, the UAS imagery was collected in 2 days and then examined quickly on a computer screen, in stereo, to identify features of interest. Since the imagery is orthorectified, feature locations are easily recorded with the click of a mouse button. There is no need for sketches, as the imagery provides a permanent record, not only of the feature itself, but also its arrangement, size, shape, condition, and spatial relationships with other features. Imagery for this project was collected in September 2017 and has been processed into a 1-cm resolution orthomosaic with feature identification in progress. 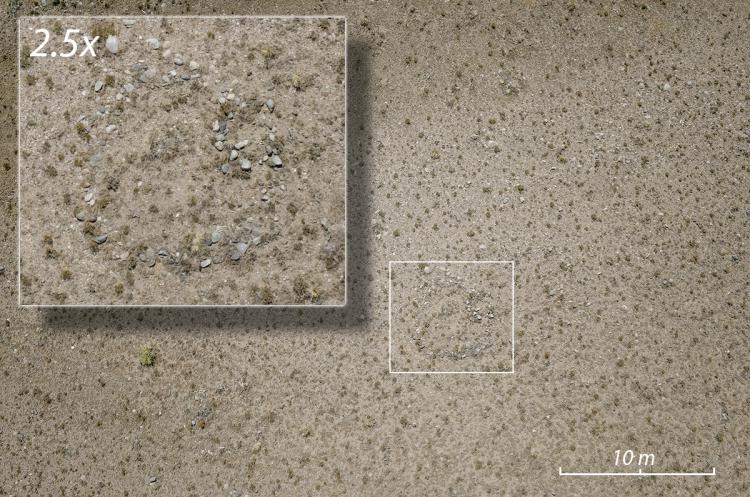