A decommissioned landfill located on BLM-managed land in Fairplay, Colorado, was found to be leeching chemicals into the groundwater. A planimetric and topographic survey was requested to be used in the design of a new cap and drainage infrastructure to mitigate groundwater contamination by minimizing rainwater infiltration. At more than 30 acres, a traditional survey of the landfill would have taken 4 to 5 days of field work to complete. To speed up the process, the BLM National Operations Center (NOC) utilized small unmanned aircraft systems (sUAS) to collect stereo-imagery of the landfill.
Before imagery was collected, 30 ground targets were distributed throughout the landfill and their positions were recorded using a Trimble R10 RTK survey grade GNSS system. Imagery was collected using a Ricoh GR II camera and flown with a 3DR Solo sUAS. The entire site was imaged twice with both north to south and east to west flight lines over a couple of hours. Using a rigorous photogrammetric (structure-from-motion) workflow, the stereo-imagery was used to produce a 3D point cloud, orthomosaic, and contour lines all with high spatial accuracy (0.025 m total error) within a week of collecting the imagery. Those geospatial products were used to create an AutoCAD drawing for engineering purposes and will be valuable in determining the cut and fill values for designing a new cap and drainage system for the landfill. Performing the topographic survey with sUAS collected stereo-imagery dramatically reduced the time required to conduct the survey, was less expensive, and produced data with a point density 100 times higher than what could have been collected using conventional survey methods. 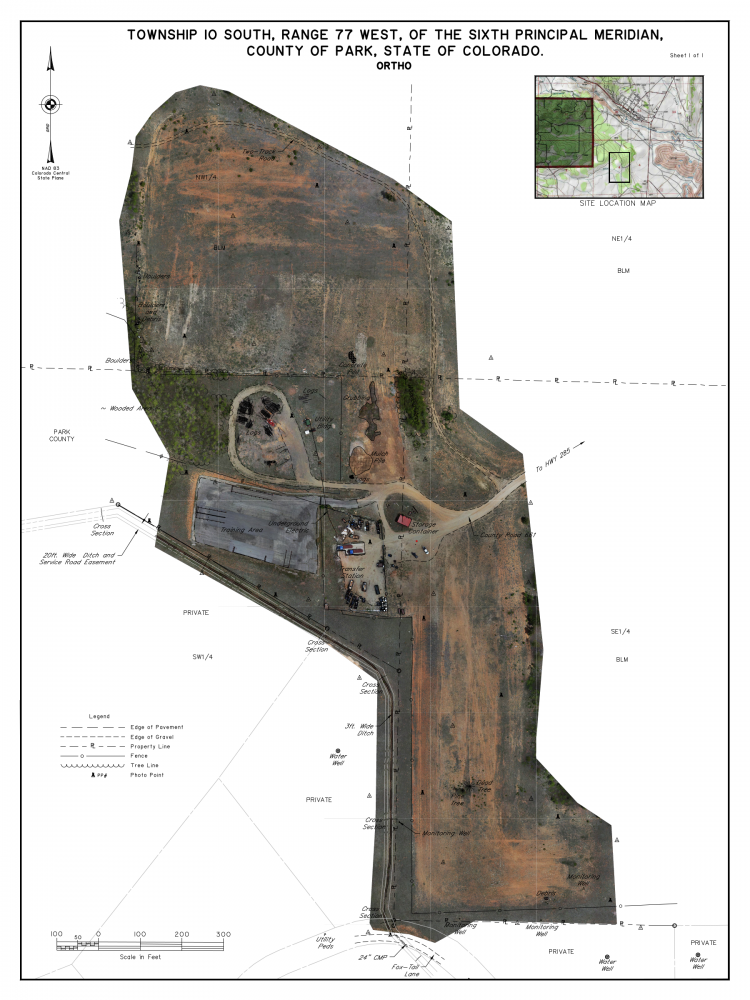 An orthomosaic site map of the decommissioned landfill in Fairplay, Colorado. The boundaries and features of the landfill were detailed and outlined in AutoCAD Civil 3D 2017.