Slumps caused by thaw of permafrost are common in Alaska's Arctic national parks. Slumps often occur near rivers or lakes and can shed significant amounts of sediment into the adjacent water body.  The NPS Arctic Inventory and Monitoring Network (ARCN) is using photographs taken with a 35 mm digital single lens reflex camera and structure-from-motion software to make 3-dimensional models (digital elevation models and orthophotographs) of slumps in the Noatak National Preserve and Gates of the Arctic National Park.  Models from different years are used to document the rate of growth of the thaw slumps.  Some of the slumps we are monitoring grew steadily over the study period (2010 through 2012), with escarpments retreating at a rate of up to 30 m per year.  In other slumps the rate of growth slowed during this period and the slumps began to stabilize.  Monitoring is ongoing, with new photos taken in 2013 and planned for future years. 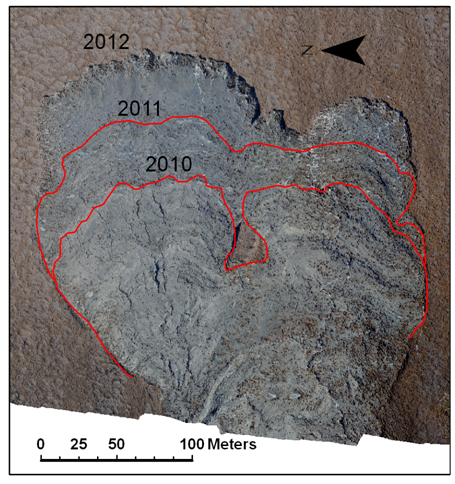 Growth of a thaw slump in the Noatak National Preserve, Alaska, 2010–2012. This orthophoto was created from multiple oblique aerial photos with structure-from-motion computer software; scarp positions in 2010 and 2011 were obtained from similar orthophotos registered to this orthophoto.