The NPS Arctic Inventory and Monitoring Network (ARCN) is using high-resolution satellite images and historical color infrared aerial photographs to monitor the abundance of small landslides resulting from thaw of permafrost. Active-layer detachments (ALD) and retrogressive thaw slumps (RTS) are small landslides that occur as a result of thaw in permafrost regions. They expose bare soil that can be readily mapped on color infrared imagery. NPS mapped the extent of bare soil in thaw-related slope failures in four study areas with continuous permafrost in Alaska’s arctic national parks on aerial photographs from circa 1980, satellite images from 2006–2009, and satellite images from 2018–2019. In all four study areas, the number of ALD and RTS identified, as well as the area of bare soil they exposed, was lower in the most recent sampling episode than in the previous one, in spite of recent record warm conditions. One study area had frozen debris lobes (FDLs) in addition to ALD and RTS. In that study area, the bare ground exposed by destabilization and rapid movement of FDLs was greatest in the last sampling episode, probably as a result of deep thaw. These results show that slopes can re-stabilize under warming conditions, provided that conditions remain cold enough to maintain stable permafrost below the active layer. 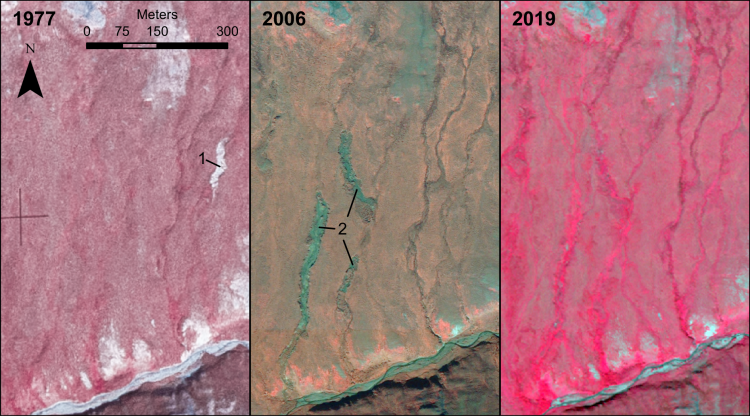 Example of active-layer detachments (ALD) in a single location during the three sampling episodes. The image year is indicated on each frame. The terrain slopes downhill to the south. In 1977 there was one recent ALD (1). In 2006 the 1977 ALD was completely re-vegetated and three new ALD had recently formed (2). In 2019 all previous ALD had revegetated. This location is near longitude -157.904°, latitude 68.251°.