OSM’s  Technical Innovation and Professional Services (TIPS) Program provides off-the-shelf scientific and engineering software, customized software training, and technical assistance to its user community, which includes States, Tribes, and other OSM offices.  Part of the technical assistance includes providing geospatial data and support to TIPS customers.  OSM is one of the smallest Bureaus in the Department of Interior with equally small resources, so TIPS has limited remote sensing personnel and limited resources and a backlog of projects and requests to be completed.  Therefore, TIPS greatly benefits from an interagency agreement with the National Geospatial-Intelligence Agency (NGA) and the USGS, which helps complete requests for geospatial support.

One of the NGA’s resources for Government agencies is the Rapid Response Ortho (RRO) Program.  Through the RRO program, TIPS obtains orthorectified satellite imagery at no cost to OSM.  The imagery includes any satellite images in the vendor’s archives including QuickBird-2, WorldView-1, and WordView-2 from DigitalGlobe and GeoEye-1 and IKONOS.  Images as old as 5 years or as recent as a few weeks from the date requested were delivered.  Over a 6-month period, OSM obtained high-resolution satellite images for over 145 areas of interest across the United States covering about 36,000 km² as shown in the following figure. 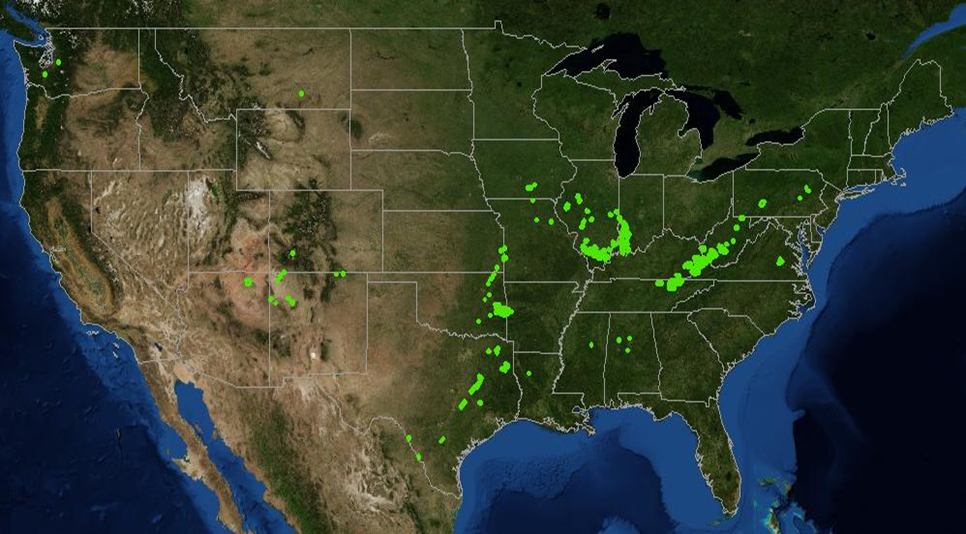 The green polygons on the map of the conterminous United States illustrate the areas where OSM received processed high-resolution satellite imagery from NGA’s RRO Program.

The satellite imagery received through the RRO program is used for different purposes including making basic measurements of features on surface coal mines, such as  observing the location of the mining pits in relation to permit boundaries, identifying cultural features and streams, and detecting change of an area by comparing satellite images acquired at different times.  Advanced uses of the RRO high resolution satellite imagery include vegetation mapping, image classification, and feature extraction to identify features over large inaccessible areas.

The RRO imagery was used for a project in Cement Creek, in Silverton County in southwestern Colorado.  Cement Creek has acid mine drainage, and recent imagery was needed to locate the sources of the acid drainage.  The most recent image for the area was a black and white image acquired May 28, 2011, in the WorldView-1 archive. Despite high snow coverage, the data were extremely useful for finding the point sources of acid mine drainage.  The acid discharge melted the snow making the discharge sources easy to locate.  Some of the acid discharge sources in the image were known (figure below) and some new sources were identified even though some of these new sources had been observed on the ground (figure below).

The left image shows a known point source of acid mine drainage in an aerial image of Cement Creek, Colorado.  The right image is the WorldView-1 RRO image that depicts how the acid discharge has melted the snow.

The left image from Google Earth depicts what appears to be fractured rocks at Cement Creek, Colorado.  The right image is the WorldView-1 RRO image showing snow melted over the fractured rocks due to the acid content. The source of acid discharge was not known prior to identifying it on the imagery.

As a result of NGA’s RRO Program, OSM TIPS has been able to fulfill many requests for high-resolution satellite imagery.  This program saved time and money by providing preprocessed data at no cost to OSM.