FWS scientists used multitemporal Landsat imagery in Google Earth Engine to construct seasonal averages of temperature and turbidity along the entire length of the Lower Mississippi River.  In battue open waters (near shore within levees), results indicate that oxbows and other off channel open waters tend to be warmer and less turbid than main channel conditions; water bodies that are more well-connected with the river tend to be more turbid and cooler during the spring than less well-connected water bodies; and summer turbidity is potentially related to depth where clear water bodies are deeper on average. In secondary channels or chutes, waters are variable, but are generally warmer and clearer than the main channel. In the main channel, satellite imagery shows that downstream from major river confluences, compartments of water having different thermal and turbidity signatures can remain distinct far downriver from the confluence. This Landsat-based remote sensing analysis provides quantitative geospatial observations of large aquatic landscapes that may be compared with historical in-situ observations.   This information will be used by the Lower Mississippi River Conservation Committee Water Quality Monitoring Group to:
1.            Improve strategic alignment of monitoring stations
2.            Target specific zones depending on monitoring goals
3.            Inform interpretation of historical data
Processing using Google Earth Engine allows this analysis framework to be applied flexibly and rapidly in other locations and for other applications. 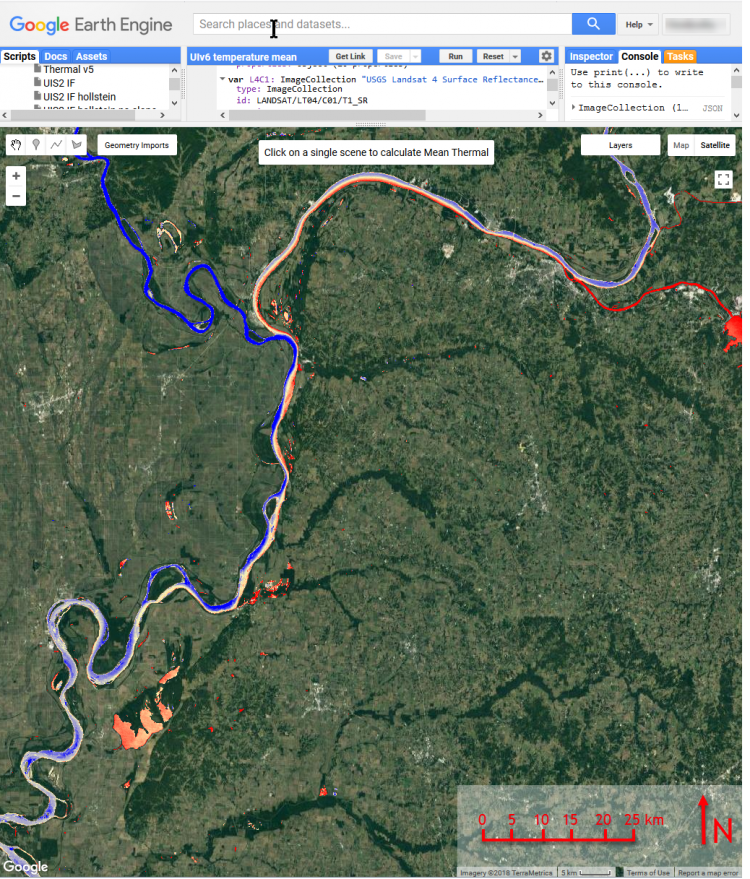 The multitemporal Landsat image shows average temperature at the confluence of the Middle Mississippi and Ohio Rivers during December through March.  During this season, water from the Middle Mississippi is about 2° C lower than water coming from the Ohio and Tennessee Rivers, and these compartments of water remain distinct for up to 65 miles downstream—from Cairo, Illinois, to New Madrid, Missouri. Note also differences in temperature and turbidity between the centerline of the main channel and nearshore areas—nearshore zones are warmer and less turbid than the main channel.