Documenting bird and bat migration is challenging because migration activity is sporadic, and nocturnal migrants (most aerial vertebrate migrants) are difficult to observe. FWS uses mobile avian radars to study the timing, duration, and activity patterns of birds and bats as they move through the Great Lakes (https://www.fws.gov/radar).  Each radar unit has a horizontal antenna (HSR) that scans 360° just above the horizon to monitor flight directions, and a vertical antenna that scans a vertical slice of the sky to measure passage rates and altitudes.  In the fall of 2017, the FWS team deployed a radar unit along Lake Erie in Cleveland, Ohio, to study how migrants move through an urban setting, use the lake shoreline, and traverse (or avoid) Lake Erie. Understanding the paths and timing of migration, and how birds and bats use airspace along Great Lakes coastlines informs risk assessment for coastal development and allows managers to prioritize conservation efforts. 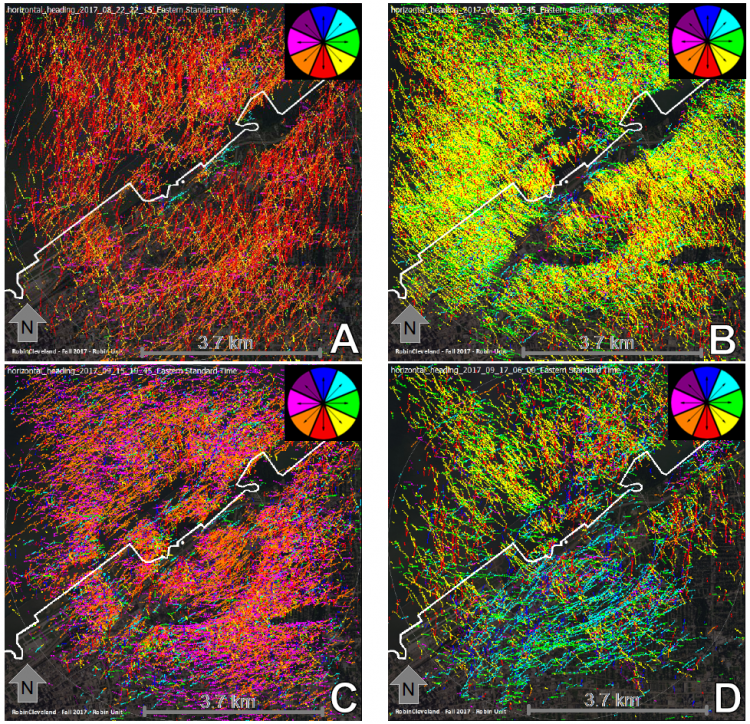 Examples of common migratory events on Lake Erie in Cleveland, Ohio. Each colored line is a tracked migrant, with color indicating direction as noted in the compass rose in the upper right corner of each figure. The white point in the center of each panel is the location of the radar unit, and the white line is the shoreline, with Lake Erie to the north-northwest. Each panel depicts a 15-minute time interval. A) Migrants moving south, likely crossing Lake Erie (August 22, 22:15). B) Migrants moving southeast, also likely crossing Lake Erie (August 20, 23:45). C) Migrants moving along the shore of Lake Erie to the west and southwest (September 15, 19:45). D) Offshore migrants reorienting toward the shoreline at dawn. Note the difference between the offshore and onshore directions (September 17, 06:00).