Documenting bird and bat migration is challenging because of the typically sporadic nature of migration activity and the difficulty of observing nocturnal movements. The FWS uses avian radar to monitor the timing, duration, and activity patterns of bird and bat migrations along the shorelines of the Great Lakes (http://www.fws.gov/radar/).  In the fall of 2014, the FWS surveyed areas along Lake Superior during the southbound migration season.  Migrants were observed following the shoreline in northern Minnesota and then crossing Lake Superior not only via a shorter route (to the Bayfield Peninsula in Wisconsin), but also via one of the widest open-water stretches of the Great Lakes (to the Keweenaw Peninsula in Michigan.)

In spring 2015, we set up avian radar units on opposite sides of the eastern upper peninsula of Michigan at both Lake Superior and Lake Michigan to capture the northbound migration. Patterns observed at these locations and at the fall 2014 locations matched those in other areas of the Great Lakes: large numbers of migrants move in consistent directions at night, return to shore at dawn, and fly at altitudes that may put them at risk from wind turbines. Data and information derived from this project along with the FWS Voluntary Land-Based Wind Energy Guidelines will help inform decisions to balance the needs of wind energy development with the need to protect wildlife. 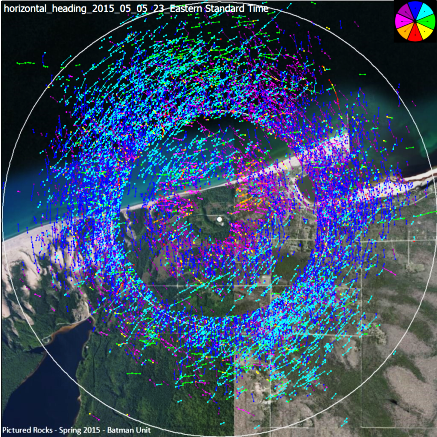 This graphic shows migrants moving over the upper peninsula of Michigan during spring 2015. This image summarizes 1 hour of migrant activity and the colors of the lines indicate the direction of travel of the particular target. Blue colors dominate this image, showing that most targets were moving north, as expected during spring migration. The image is 4 nautical miles wide and north is oriented toward the top.