At roughly 50,000 mi2, the Yukon-Kuskokwim River Delta forms a vast, flat expanse in western Alaska that is a critical northern breeding and staging habitat for migrating waterbirds and hosts more than 35 indigenous villages.  Due to its orientation, shallow bathymetry, and low relief, the delta is highly vulnerable to coastal flooding associated with storm surges, which can reach miles inland.  The region also appears to be subsiding, which further exacerbates flooding concerns.  As a result, the villages in the area are some of the most imperiled communities in Alaska. Existing elevation datasets are not adequate for emergency response planning or resource management purposes; high-resolution data are required to accurately map the subtle topography of the delta. In response to the USGS's 3D Elevation Program (3DEP) request for proposals, the Western Alaska Landscape Conservation Cooperative and FWS staff organized a total of six State and Federal agencies to jointly apply for a grant to acquire lidar data over a portion of the delta.  The USGS is contributing additional funding and working with vendors to arrange for lidar acquisition in 2016 and 2017. The intent is to acquire roughly 1,500 mi2 of lidar data over some of the most highly productive and vulnerable areas in the delta. The final digital elevation model will have an average accuracy of 4 to 6 inches, and will be hydro-flattened to allow water bodies to be seen in detail.  Lidar data can also be used to assist conservation efforts to establish sustainable summer trails in communities. The project will cover several communities facing substantial climate change impacts, providing baseline elevation data at a suitable resolution. 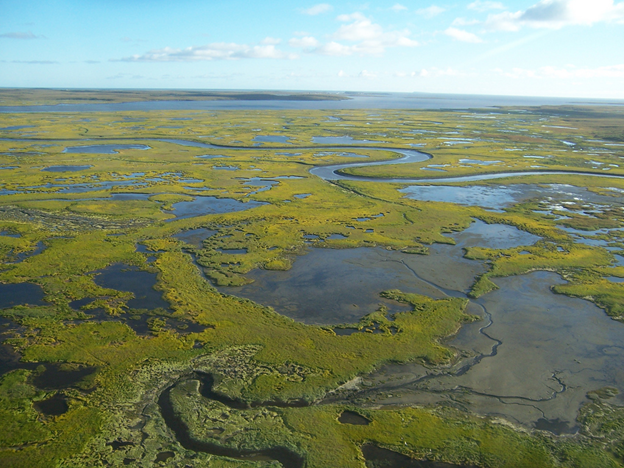 An oblique image of the complex wetlands within the lidar acquisition area.