Pitcher's thistle,  a threatened native plant that grows on beaches and grassland dunes along the shorelines of Lake Michigan, Lake Superior, and Lake Huron, is an important food source for certain birds and small mammals. Although once fairly common in sand dune ecosystems of Michigan, its numbers have declined in recent decades due to habitat destruction associated with shoreline development, recreational use, and invasive plant species. The thistle was classified as a federally threatened species in 1996 by FWS.

Benjamin Heumann, Director of Central Michigan University's Center for Geographic Information Science, led a team of geography graduate students at Wilderness State Park near Carp Lake. They flew a vertical camera on board a helicopter UAS, which  took thousands of aerial photos that the researchers will use to map all locations of Pitcher’s thistle. 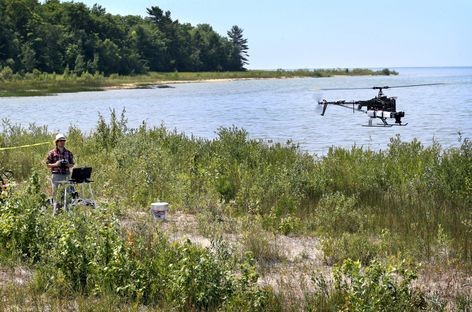