Terrestrial lidar, or T-lidar, was deployed by the USGS in the immediate aftermath of Hurricane Isaac to map urban flooding and quickly generate 3-D maps of buildings, dams, levees and other structures that were damaged in the storm.  For example, the Tangipahoa Dam near McComb, MS, was damaged during heavy rainfall in Hurricane Isaac and caused thousands of people in Tangipahoa Parish downstream to be evacuated.  Using T-lidar, the crew captured multiple 3-D scans of the dam, including two large landslides on its downstream side and were able to estimate the size of the slides as well as monitor the slide movement over the course of two days. 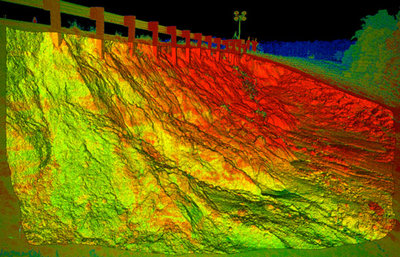