Coastal wetlands are critical nursery areas for coastal and oceanic life are essential to ocean productivity. The health of these systems is intrinsically linked to the frequency and duration of inundation and the salinity of the flushing waters.  To identify the thresholds of these inundation variables, their spatial and temporal changes must be determined.  To overcome these difficulties, as well as cloud cover and subcanopy penetration limitations of optical sensors, a proof-of-concept design that incorporated eight Envisat Advanced Synthetic Aperture Radar (ASAR) scenes collected before and during three months after elevated salinity storm-surge waters inundated the coastal marshes of Louisiana.  It was found that inundation extent and duration were linked to landcover. Seven days after landfall, 48 percent of coastal estuarine and palustrine marshes remained inundated by elevated salinity storm-surge waters, and 45 days after landfall, storm-surge waters inundated 20 percent of those same marshes. Following a period of persistent offshore winds, a dramatic decrease in inland water levels and a complementary sudden decrease in ASAR-based inundation extent November 4 image marked the end of the storm-surge flood period.  A subsequent inundation re-expansion followed multiple intense rainfall events. 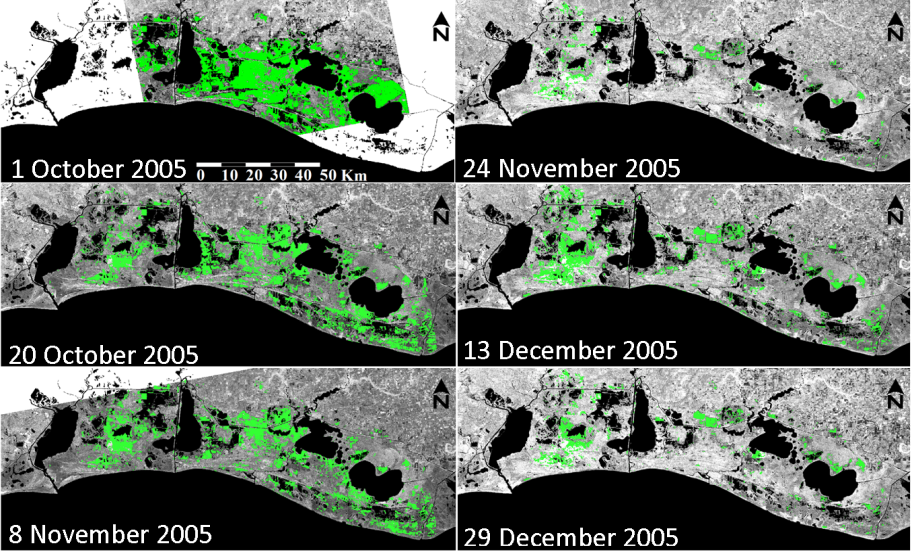 Envisat radar imagery of the Louisiana coast collected after Hurricane Rita in 2005.

Elevation data derived from lidar showed that storm-surge waters rapidly receded from nonimpounded marshes at elevations less than 80 cm while slower recession was dominantly associated with impounded marshes at elevations greater than 80 cm during the first month after hurricane landfall.  After this initial period, drainage from marshes was hastened by the onset of offshore winds.