Wildlife management agencies in North America have a long history of using aircraft to monitor population abundance of ducks, geese, swans, and other migratory birds.  While low-level, ocular surveys have been very successful and cost-efficient, they subject agency personnel to substantial risk.  Ocular surveys, involving multiple air crews and observers, must include methods to minimize or estimate important biases such as detection, misclassification, flock-size estimation, and sample area determination.  Integration of airborne remote sensing as a primary data collection tool is of interest as a means of enhancing crew safety and reducing or standardizing survey biases.  In 2016, FWS Region 3 partnered with a diverse team from Federal, university, and non-governmental organizations to begin determining whether low-level ocular surveys of long-tailed ducks in Lake Michigan could be replaced with a photo survey alternative.  A camera and direct georeferencing system consisting of an 80-megapixel metric grade aerial visible camera with a 70 mm lens, a mid-wave (3–5 μm) cryo-cooled InSb thermal camera with a 50 mm lens, and an Applanix Inertial Navigation System was mounted in a FWS Region 3 Partenavia aircraft, and used to conduct photo surveys at a variety of altitudes ranging from 61 to 600 m above the water surface.   Images were selected based on quality, annotated based on content (species, age and sex of waterfowl, and behavior), and used to train a deep Convolutional Neural Network (CNN) and a baseline (off-the-shelf) machine vision algorithm to recognize birds in four categories.

Results were extremely promising: the imagery collected was of high quality, making it easy to annotate many birds into the sex and behavior categories that the algorithms needed to recognize.  Both the baseline machine vision and the CNN algorithms were successful at identifying most categories of long-tailed ducks, especially birds sitting on the water (81% and 89% identified, respectively).  The CNN deep learning approach was more successful at identifying birds overall (63% versus 40%), especially in flight (55% versus 1%).   With the advances in airborne remote sensing technology and the rapid development in the field of artificial intelligence, the operational use of photo documentation and deep learning object recognition methods to survey pelagic waterfowl in systems as large as the Great Lakes is within reach. 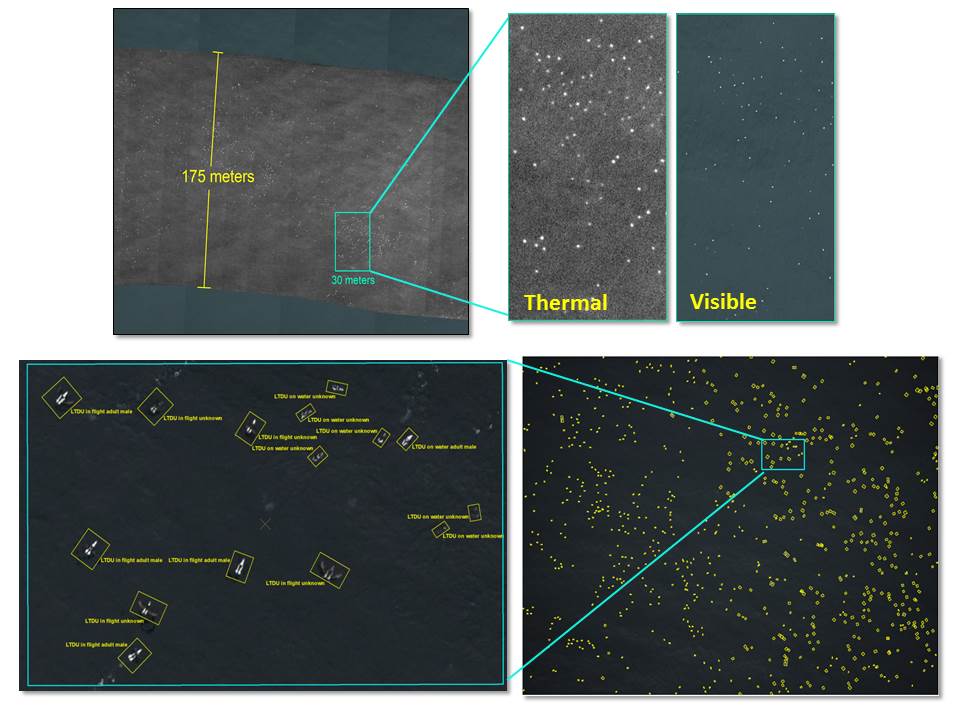