Assessments have been conducted for 2005 to the present, and are used to help determine if regional habitat objectives are being met, while also providing insights into inter-annual and intra-annual variation in habitat. In addition, these data are used to assist with planning and assessment of conservation delivery practices. For example, the GCJV uses waterfowl habitat assessments to measure the contribution of the Texas Prairie Wetlands Project, a partnership that works with private landowners to restore, enhance, and create shallow-water wetlands, to the overall regional waterfowl habitat abundance. 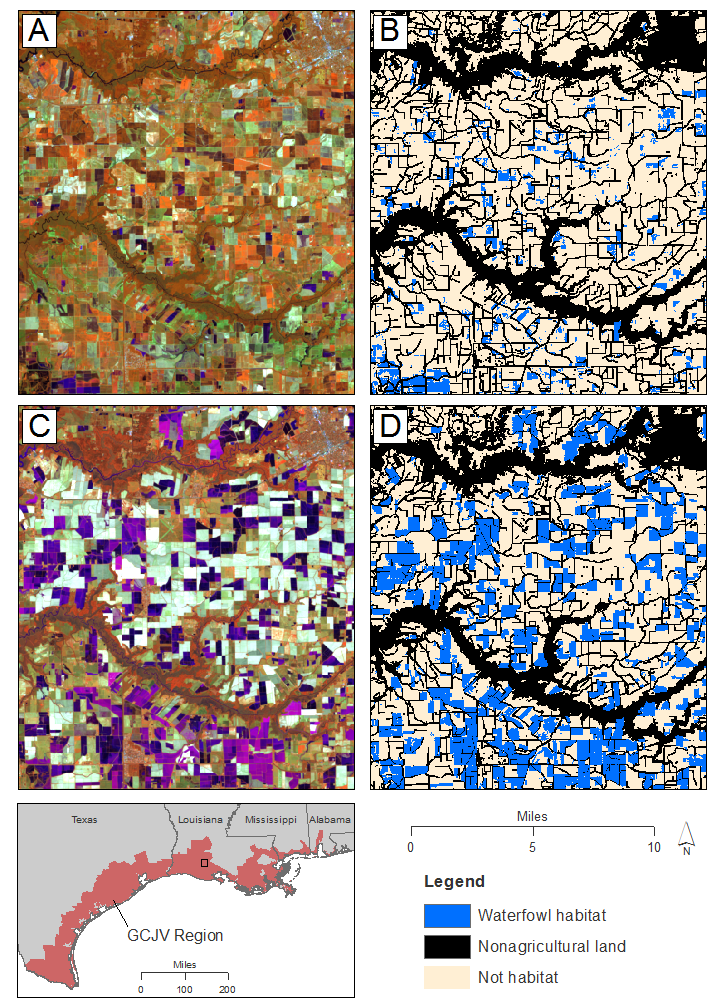 Waterfowl habitat on inland agricultural lands during fall and winter of 2016–2017 for a selected area in southwestern Louisiana. (A and C) Satellite imagery during fall 2016 (A) and winter 2017 (C). Imagery is a false-color composite of Landsat 8 imagery (bands 5, 6, 4) in which water appears blue or purple, vegetation appears red or brown, and bare land appears yellow or green. (B and D) Waterfowl habitat assessments for fall 2016 (B) and winter 2017 (D). In these maps, waterfowl habitat (blue) includes flooded agricultural fields, temporary and seasonal wetlands, and moist soil impoundments. Non-agricultural lands (black) are areas that have been excluded from assessments, which include forests, permanent water bodies, and urban areas.