Beech bark disease (BBD) was first detected at Pictured Rocks National Lakeshore (PIRO) in the early 2000s and is infecting and killing American beech (Fagus grandidentata) trees, producing gaps in the forest canopy. Many wildlife species rely not only on the connectivity of the forest canopy but also on the mast produced by the beech trees, which provide food. Biologists at the National Lakeshore need to understand how wildlife is reacting to the canopy cover and food availability changes caused by BBD. This study provides the National Lakeshore biologists a canopy connectivity layer that shows change over time, allowing them to see where the forest has changed the most.

To create the forest canopy layer, the USGS Upper Midwest Environmental Sciences Center is leveraging NASA’s Ames Stereo Pipeline and aerial imagery as part of Natural Resources Preservation Project (NRPP). The Ames Pipeline uses a Digital Terrain Model (DTM) to create Digital Surface Models (DSM) from stereo aerial imagery. Using imagery of the National Lakeshore from different time periods, the DSMs will allow the park to visualize where canopy has been lost and replaced historically. Canopy height models are derived from the DTM and DSM, and an R script will identify forest canopy connectivity for each time period. A time change analysis will be conducted between 2005 and the current time to identify areas with the greatest change due to the BBD infestation. 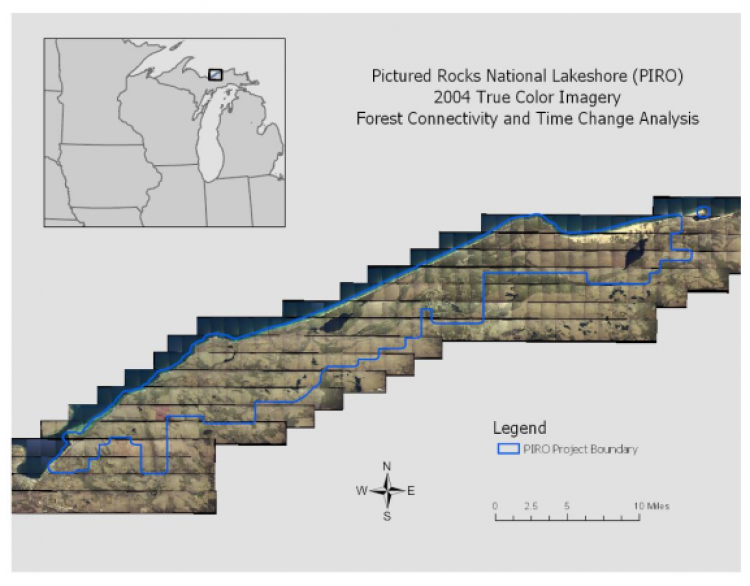