To evaluate the health and status of wolf populations in east-central Superior National Forest (SNF) of northeastern Minnesota, the USGS Northern Prairie Wildlife Research Center monitors their movements and population dynamics.  Since 1968, researchers have used Very High Frequency (VHF) and/or Global Positioning System (GPS) radiocollars to locate and monitor individual wolves. During winter, the collars are located by aerial tracking, which allows observation of collared wolves and their packs, thus providing data for annual surveys of populations and long-term population trajectories. However, non-invasive methods are preferred over physically capturing animals to radiocollar them. The USGS, in cooperation with the Minnesota Department of Natural Resources, is now testing the utility of a suite of non-invasive methods to monitor the wolf population in the SNF while using traditional aerial radiotelemetry results for comparison.

Recent advances in non-invasive methods, such as genetic surveys and camera trapping, combined with ground and aerial observations of tracks in the snow, may now provide reasonably accurate population estimates. Information on wolf pack size and territory obtained from snow tracks, camera trapping, genetic analysis of scats, and citizen-scientist observations was compared with aerial observations of radioed wolves and their packmates. The first planned January–March 2019 test was shortened due to the Federal Government shutdown. However, results were encouraging enough that the methods will be tried again during winter 2020. Preliminary conclusions suggest that noninvasive methods reduce reliance on trapping wolves for radiocollaring, although they may or may not entirely replace radiocollaring, depending on research questions. 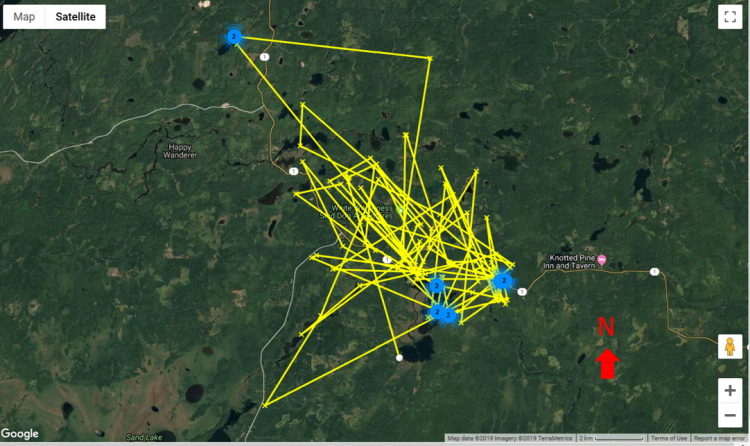 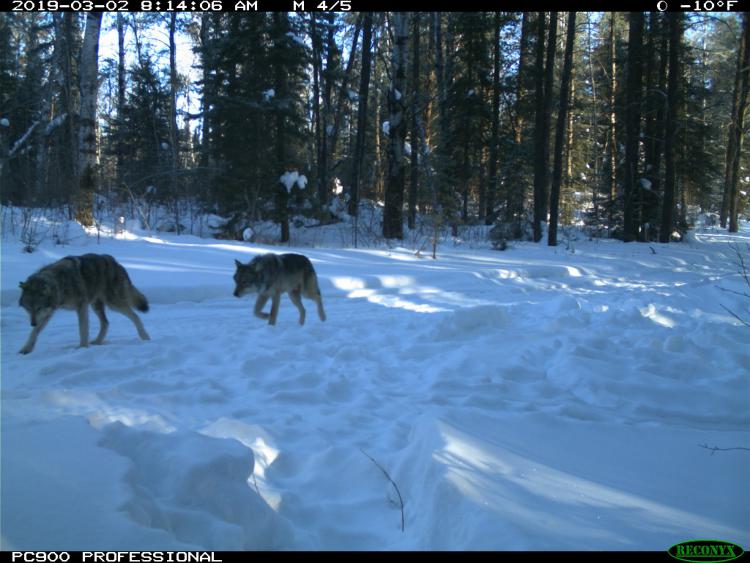 (Photo) GPS-collared Wolf 7248 following his packmate, captured on a trail camera during winter 2019.