The USGS has completed and released the National Land Cover Database (NLCD) 2016 for the United States. NLCD 2016 documents land cover in the conterminous United States from 2001 to 2016. The database includes seven layers that portray the Nation’s land cover for the years 2001, 2004, 2006, 2008, 2011, 2013, and 2016, and four products of percent impervious surface for the years 2001, 2006, 2011, and 2016. NLCD 2016 is fundamentally based on the analysis of Landsat imagery with an emphasis on year-to-year consistency that enables the accurate measurement of change in land cover and impervious surface, providing the ability to understand both current and historical land cover and land cover change as well as enabling monitoring and trend assessments. Data downloads and links to Web Mapping Services are available at the Multi-Resolution Land Characteristics Consortium website, https://www.mrlc.gov. 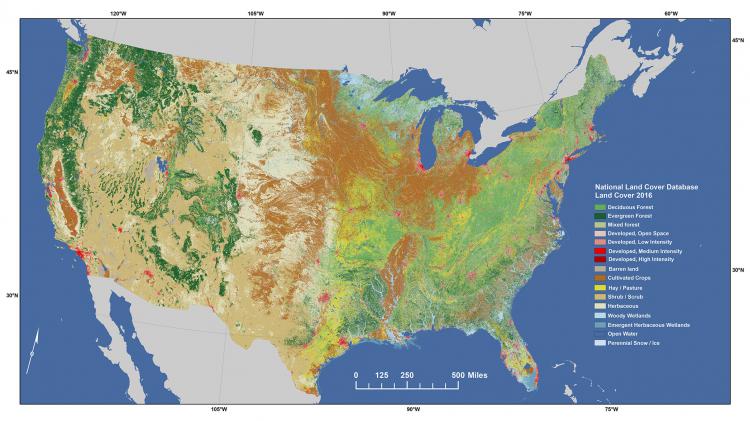 NLCD land cover for 2016, which is the most recent land cover product available at 30-meter resolution within a consistent, integrated database dating back to 2001.