The GeoCLIM climate analysis tool and the Climate Hazards Group Infrared Precipitation with Stations (CHIRPS) rainfall dataset were developed to support a request from the U.S. Agency for International Development Famine Early Warning Systems Network (FEWS NET).  In May 2018, Kenya experienced extremely hazardous torrential rains.  As climate models began to indicate that the development of an El Niño appeared likely, FEWS NET analysts became concerned about more flooding during the next rainy season (October–December).  El Niño events are historically associated with above-normal rains in Kenya during this time period.  A complicating factor, however, is that East African rains are also influenced by variations in the Indian Ocean Dipole (IOD), a measure of the east-to-west difference in Indian Ocean sea surface temperatures.  Strong positive IOD events are associated with warm waters in the western Indian Ocean and above-normal rains in East Africa.

Would an El Niño alone be sufficient to produce extreme East African rains?  Scientists at the USGS Earth Resources Observation and Science (EROS) Center and the University of California, Santa Barbara, developed the GeoCLIM tool so that scientists in developing countries can answer these types of questions.  Using the GeoCLIM, two FEWS NET scientists (Gideon Galu and Laura Harrison) produced CHIRPS rainfall composites for previous El Niño October-to-December seasons that were not IOD events (1986, 1987, 2004, 2009, and 2014).  Surprisingly, the rainfall outlook under these conditions tended toward slightly below normal.  Galu also produced a composite for years that were both El Niño and positive IOD events (1982, 1991, 1994, 1997, 2002, 2006, and 2015).  In this case, there is a strong propensity for above-normal rainfall.  The results of this work indicate that El Niño alone is not typically sufficient to produce extreme rainfall during October–December.  When El Niño and the IOD combine to produce large increases in onshore moisture transports and uplift, the risk of flooding is substantially increased.  Because the state of the Indian Ocean evolves more rapidly than the equatorial Pacific, FEWS NET analysts may need to wait to see how it evolves, even if an El Niño develops. 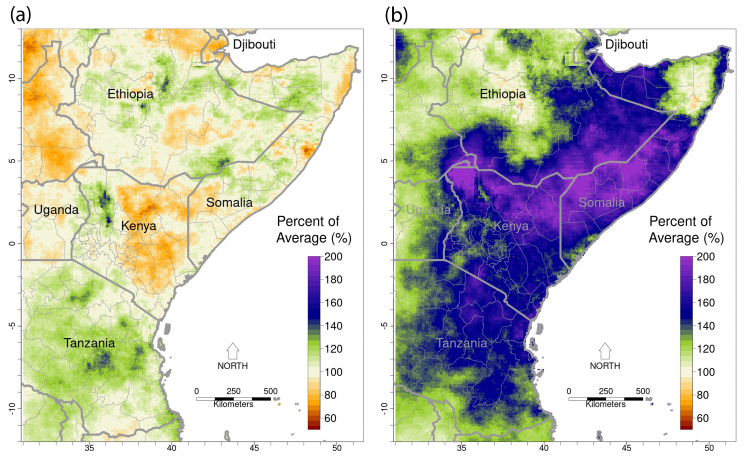