The potential for gravitational and explosion-driven collapse is one of the greatest hazards of lava dome eruptions.  Topographic modeling of active lava domes is useful for detecting changes that may influence collapse or explosive activity. It also provides constraints on the volume of potentially collapsible material, a key parameter of effective hazard assessment.

Ecuador’s Volcán El Reventador has been in eruption since 2002, when the volcano produced its largest historical eruption (VEI 4), destroying its summit cone and leaving a large summit crater.  Eruptive activity since 2002 has consisted of intermittent explosions and effusion of lava flows and domes.  Lava extrusion during the past 15 years has built up a lava dome that currently overtops the 2002 crater rim and exceeds the pre-2002 eruption volume by nearly 20 million cubic meters.  Occasional block and ash flows are produced from small explosions and material collapsing from the dome, but to date, no large-scale dome collapse has occurred.

The U.S. Agency for International Development (USAID)-USGS Volcano Disaster Assistance Program has worked with the Instituto Geofísico- Escuela Politécnica Nacional of Ecuador since 2013 to create a sequence of digital elevation models (DEMs) from oblique visual and thermal images captured via observation flights that go back to 2002.  These topographic models are used to provide constraints on the volume of potentially collapsible material and the structural stability of the lava dome as well as to measure volume changes through time and estimate time-averaged effusion rates.  These data help to provide a better understanding of dome growth mechanics at Reventador as well as to provide baseline information for assessing future changes of the summit lava dome. 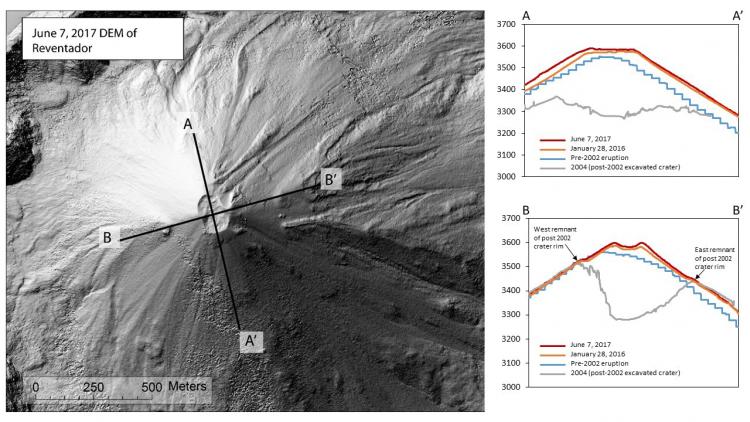 Shaded relief image of a DEM constructed from images acquired in June 2017 of Reventador volcano. The cross-section profiles show dome growth through time.