The San Carlos Apache Tribe in Arizona wants to learn more about the historical characteristics of their woodlands, savannas, and grasslands so they have a target for restoration efforts. Restoring juniper woodland to savanna is a focus of the Tribe’s intensive management activities, and spatial information that would help determine where best to attempt restoration is needed. Increases in woodland tree cover and grassland encroachment by juniper, and their negative effects on intercanopy herbaceous vegetation, are issues that the Tribe is coping with, as livestock and wildlife often depend upon the diminishing grass cover to survive and thrive. To determine changes in woodland canopy cover, the USGS Western Geographic Science Center developed image analysis techniques to monitor tree cover for three study areas using 1935 and 2017 aerial imagery and compared results over the 82-year interval. The team used Adobe Photoshop software in a novel way to create multiple, simple, and reproducible supervised classifications that were combined to generate binary canopy maps for each of the study areas. Continuous percent cover was then calculated for each 50-meter by 50-meter area within the study areas, and a temporal difference image was generated.

In general, results depict a substantial increase in the woodland tree canopy cover between 1935 and 2017. For example, in the two woodland-dominated study areas, overall percent tree canopy cover estimates increased from 18.3 to 38.5% and 28.3 to 43.3%. Many of the woodlands of 2017 appear to resemble savanna environments in 1935. Although the expansive grasslands of the Big Prairie section of the Reservation experienced encroachment by juniper trees mostly around its periphery, the smaller grassland units within the former savanna most often changed substantially since 1935. Additionally, this research provides evidence of the success of Tribal management efforts at Bee Flat, where managed landscape canopy cover is roughly analogous to the natural savanna tree cover mapped in 1935. These results are important as former savanna areas once dominated by native grasses and forbs were replaced with higher density juniper-pinyon-oak woodlands, with their degraded soils and limited herbaceous understories. The San Carlos Apache Tribe intends to use map results from this analysis to help locate other woodland areas amenable to restoration. Pinyon-juniper expansion and infilling are increasingly a major challenge for land managers across the Intermountain West, and historical information from remote sensing may help provide important decision-support data. 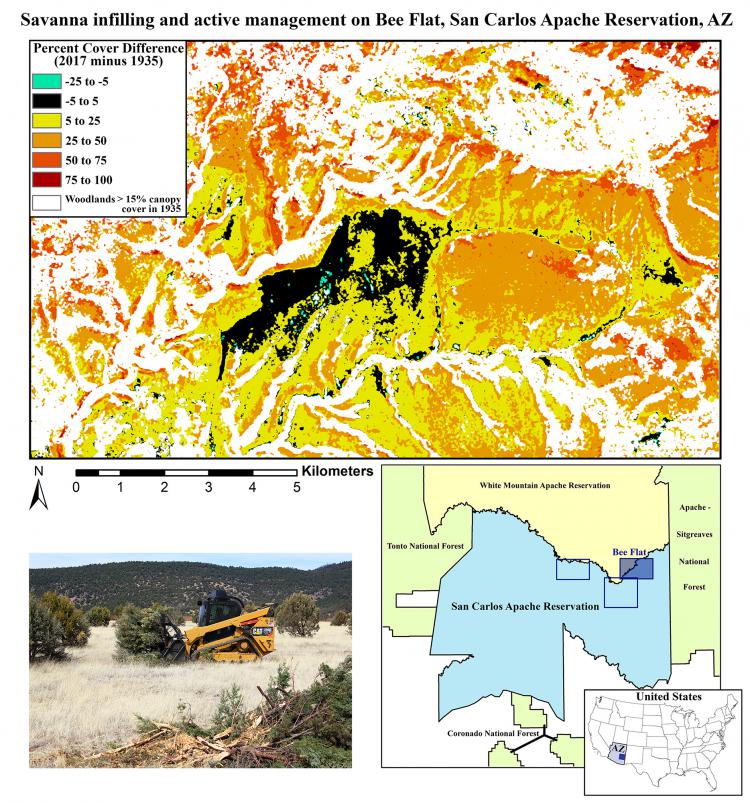