Freshwater algal blooms are estimated to cost the United States economy up to $4.6 billion annually in disruptions to tourism, recreation, drinking water supply, and aquatic food production. Yet knowledge of where and when these blooms occur still often depends on public reporting. As a result, many waterbody managers and public health officials maintain a reactionary posture with respect to algal blooms, issuing notices in response to reports from the public. Near-real time remote sensing of algal blooms has the potential to shift this posture from reactionary to proactive by filling the data gap with actionable science.

In a case study in Brownlee Reservoir on the Idaho-Oregon border, United States and European satellite data were operationalized to map and communicate, in near-real time, the relative abundance and spatial distribution of planktonic chlorophyll-a, used as a surrogate for algal abundance. Historical imagery, coupled with field observations of chlorophyll-a and manually digitized data points, are used to evaluate the performance of published spectral indices in classifying satellite pixels based on chlorophyll-a concentrations. The resulting ensemble-based data products are used to map the exceedance probability relative to a predetermined chlorophyll-a concentration. While this tool is still in beta testing, it has shown promise for assisting water resource managers in prioritizing locations for on-the-ground monitoring to determine taxonomy and toxicity of remotely identified blooms.

While remote sensing of algae is not a new concept, there are a few aspects of this project that make it novel. The use of high-resolution imagery resolves relatively small ponds (e.g., 900 – 8,100 square meters) and narrow (e.g., 30 – 90 meters wide) segments of waterbodies that are common in the Intermountain West. Using multiple satellite platforms increases the potential for cloud-free image acquisition and results in satellite images collected and processed at least once every 5 days. Automating the image retrieval, processing, and delivery mechanisms results in derived products that are available to cooperators within 24 hours of imagery acquisition. As the project continues to progress, attention is shifting to developing derived data products at a statewide scale for waterbodies throughout Idaho. 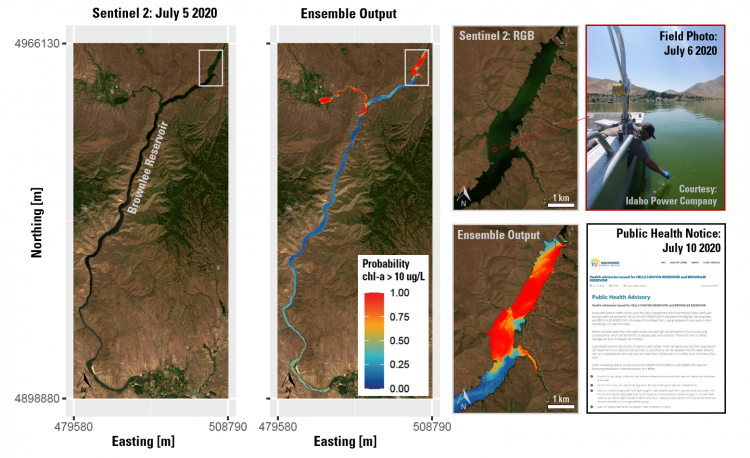 Sentinel-2A true color (RGB) and ensemble-based exceedance probability maps for Brownlee Reservoir from 5 July 2020, illustrating the spatial distribution of two algal blooms. These maps were used to identify sampling locations on 6 July (field photo), which led to a public health notice being issued on 10 July.