The Peninsular Florida Landscape Conservation Cooperative (PFLCC) region (http://peninsularfloridalcc.org/) is one of the most vulnerable regions to climate change in the United States. The low elevation makes this region susceptible to sea-level rise. Some of the potential risks include population displacement, loss of economic assets, critical infrastructure failure, and an increased occurrence or severity of natural disturbances such as hurricanes and droughts. In addition to the threats posed by climate change, the population of the PFLCC region is potentially expected to double in the next 50 years, requiring as much as 1.7 million acres for urban land use. The key research component of this study is to create an appropriate framework for decision-making at scales typical of LCC regions, across current conservation planning agencies and jurisdictions.  Where available, relevant spatial data are acquired from NOAA’s sea-level rise methods supporting lidar. 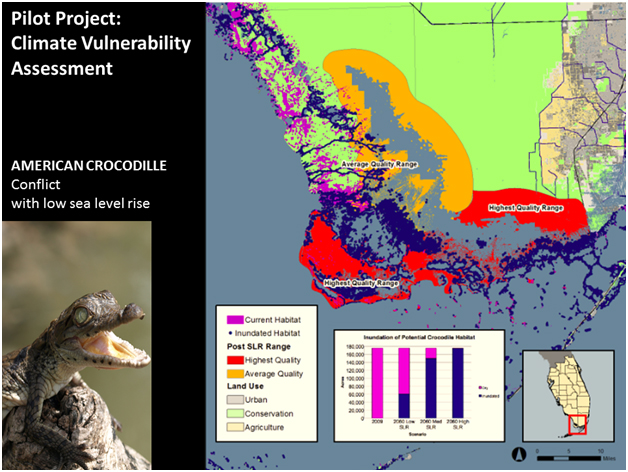 Human populations in Florida are potentially expected to double in the next 50 years, requiring as much as 1.7 million acres for urban land use. Model outputs show that land for urbanization may create further conflict with land use needs for wildlife and nature conservation.