Federal lands, covering about 23.5% of the conterminous United States, provide and sustain a wide range of ecosystem services including biodiversity preservation, mineral and energy development, recreation, and timber production. However, no systematic information about the spatial patterns and temporal changes of carbon stock and carbon sequestration potentials on Federal lands is available, representing a critical national knowledge gap.

As mandated by the U.S. Congress in the 2007 Energy Independence and Security Act, the USGS has quantified carbon sequestration potentials in the conterminous United States under various land use and climate change scenarios.  The current study evaluated contemporary and future ecosystem carbon dynamics in conterminous United States Federal lands under three Intergovernmental Panel on Climate Change Special Report on Emission Scenarios A1B, A2, and B1.  The Forecasting Scenarios of Land Use (FORE-SCE) model and the General Ensemble Biogeochemical Modeling System (GEMS) were used to simulate land use change and carbon dynamics, respectively.

The study estimated that conterminous United States Federal lands stored 11,613 million metric tons (MMTs) of carbon circa 2005 and were projected to store 13,965 MMTs of carbon in 2050, an increase of 19.4%.  The corresponding projected annual carbon sequestration rate (in kilograms of carbon per hectare per year) from 2006–2050 would be carbon sinks (i.e., carbon gains) of 620 and 228 for forests and grasslands, respectively, and a source (i.e., carbon release) of 13 for shrublands.  The Federal lands’ contribution to the national ecosystem carbon budget could decrease from 23.3% in 2005 to 20.8% in 2050.  The carbon sequestration potential in the future depends not only on the footprint of individual ecosystems but also on each Federal agency’s land use and management.  The results presented here update current knowledge about the contemporary ecosystem carbon stock and sequestration potential of Federal lands, which would be useful for Federal agencies to formulate management practices to achieve the national greenhouse gas mitigation goals. 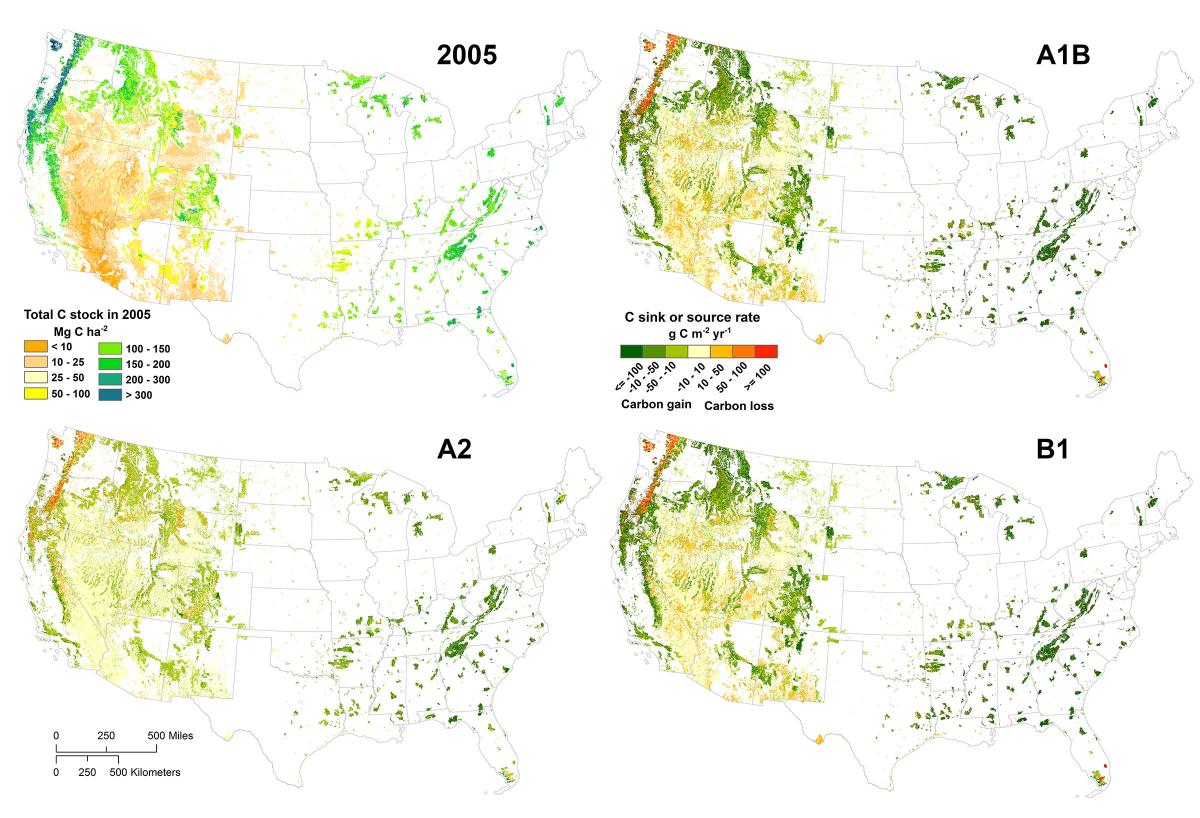 (Top left) Spatial distribution of the contemporary (circa 2005) ecosystem carbon stock (in vegetation and the top 20-cm depth of soil, averaged from three model simulations) in Federal lands across the conterminous United States.  The other panels show carbon stock changes from 2006–2050 averaged from seven ensemble model simulations for each Intergovernmental Panel on Climate Change scenario (A1B, A2, and B1).