Shortly before noon on April 25, 2015, a massive earthquake registering 7.8 on the Richter scale struck central Nepal.  Just 3 hours later—around 4 a.m. Central Time—the USGS Earth Resources Observation and Science (EROS) Center disaster response coordinators were contacted by the emergency on-call officer from the International Charter on Space and Major Disasters:  Could the USGS provide coordinates to the National Geospatial-Intelligence Agency (NGA) so it could task several of its satellites to acquire high-resolution images of the quake zone?

Getting such a call is nothing new, as the USGS has been providing support to the International Charter since becoming a member in 2005.  The Charter is a mechanism for rapidly acquiring satellite imagery of locations impacted by natural or human-made disasters and getting that data, and products derived from them, into the hands of emergency responders and relief agencies as quickly as possible, at no charge.

How does it work?  When an earthquake, flood, oil spill, or other disaster occurs, a specially trained authorized user submits a request for satellite imagery and whatever other data or products are needed.  Authorized users can initiate the Charter response for a disaster occurring in their own country, or on behalf of someone from another country.  The request sets in motion the tasking of satellites (usually within just 2 to 3 hours) to capture images, and the subsequent delivery of data to whomever needs it.

The USGS has provided access to over 5,000 images on the Hazards Data Distribution System (http://hddsexplorer.usgs.gov) for the response to the Nepal earthquake.  The 2,100 high-resolution commercial images, which were provided by NGA through their contract with Digital Globe, have been made available to responders in 28 countries. 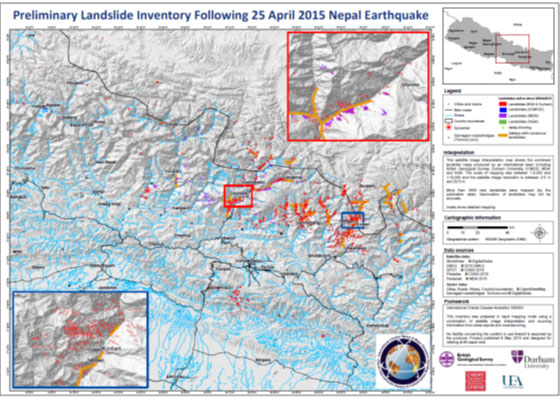 Landslide indicator map showing the locations of landslides as a result of the April 25, 2015, earthquake in Nepal.  Imagery was provided through the USGS to the users of the International Charter on Space and Major Disasters.