A pulse of water released down the lower reaches of the Colorado River resulted in a greater than 40% increase in green vegetation where the water flowed, as observed by Landsat 8. The March 2014 release of water—an experimental flow implemented under a U.S.-Mexico agreement called "Minute 319"—reversed a 13-year decline in greenness along the delta. The pulse released 130 million m3 (105,392 acre-feet) of water to recharge groundwater and germinate new cohorts of plants in the riparian corridor of the Colorado River Delta. Peak greenness was 43% greater than normal for the Zone of Inundation and 23% greater for the Riparian Zone. This greening is mainly from existing riparian vegetation, and 80% of the green-up occurred outside the inundation zone, which is 90% of the reach area. Despite the extensive infiltration of surface water in the first 60 km of river, vegetation became greener downstream, in the region south of the Southern International Boundary, strongly suggesting that groundwater was recharged from the pulse and flowed into the lower reaches, supporting the vegetation and enhancing habitat for avian species. USGS scientists are continuing to analyze how much of the pulse can be accounted for in greening vegetation and enhanced riparian evapotranspiration (ET). In the short term, the Minute 319 flow has reversed the observed downward trend in Moderate Resolution Imaging Spectroradiometer (MODIS) Enhanced Vegetation Index (EVI) and ET since the last flood in 2000. After summer 2015, scientists hope to find out if greening persists and what fraction of the flow will ultimately be accounted for by ET. 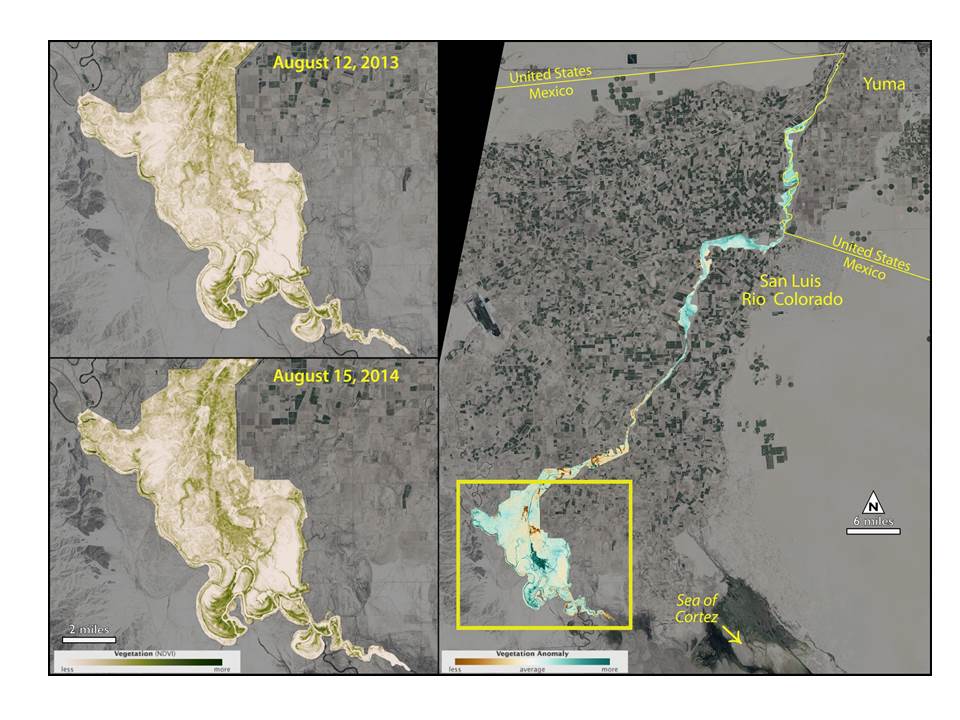