Airspace Use by Night Migrating Landbirds in Relation to the Southern Shore of Lake Erie, Ohio

In 2012, the USGS Upper Midwest Environmental Sciences Center (UMESC) started a new program in collaboration with the U.S. Fish and Wildlife Service (USFWS), Bowling Green State University, and the University of Toledo to study the migration patterns of landbirds in relation to the southern shore of Lake Erie.  It is thought that the Great Lakes shorelines, and especially Lake Erie with its roughly east-west orientation, cause birds to concentrate over land during migration to avoid crossing large expanses of water.  The U.S. Department of Energy, National Renewable Energy Laboratory (NREL), estimates that the Great Lakes are a prime location  for development of offshore wind turbine farms.  However, onshore wind turbine farms are cheaper to develop, and pressure is mounting to harvest wind resources over land near the Great Lakes.  NEXRAD weather radar data suggest  that night migrating landbirds fly over Lake Erie (Diehl et al. 2003), but marine radar positioned on the lakeshore in Ottawa National Wildlife Refuge (NWR) reveals that a large portion of lower flying birds orient their flight along the Lake Erie shoreline (flying west northwest) in spring.  Using two portable marine radar units, the study team is cooperating to answer the questions: 1) is a 3-mile buffer adequate to limit risk to birds and bats based on the ascent and descent of night migrating landbirds relative to the distance from the southern shore of Lake Erie, 2) is there a correlation between migration intensity detected using marine radar and bird banding data, 3) what is the general pattern of flight direction in the region and does it differ with distance from Lake Erie, 4) what is the intensity of migration (related to weather), and 5) do bird numbers build near the Lake Erie shoreline?  This study is designed to provide information and tools for wind farm siting decisions. 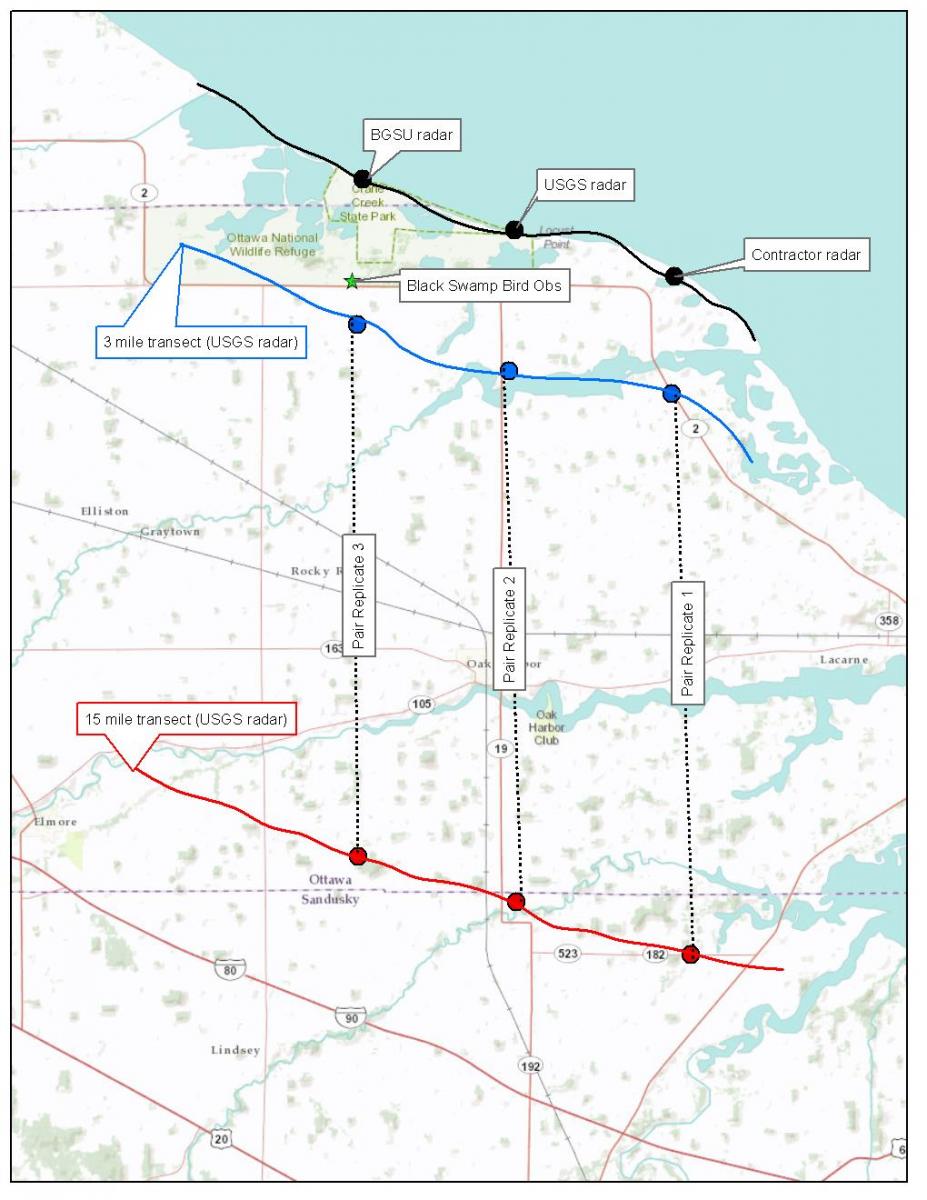 This is an example of the radar study design to evaluate migration patterns of landbirds along the Lake Erie shoreline. The locations shown on the map are approximate.