The Cassini spacecraft in orbit around Saturn is investigating the rings and moons as well as the giant planet itself.  The Astrogeology staff provides Integrated Software for Imagers and Spectrometers (ISIS) software for multiple imagers and the radar system onboard Cassini.  Research has largely focused on Titan, a moon with a thick atmosphere and an active hydrocarbon “hydrologic” cycle.  The topographic information from the radar is used to identify sites on Titan that are likely to have “cryovolcanism” where water behaves like lava in the frigid environment of the outer solar system (see figure showing cryovolcanic features on Titan).  Another study is detecting lakes of liquid hydrocarbons by observing sunglint when the geometry between the Sun, lake, and spacecraft  is just right.  Spectroscopic studies have identified ethane as a major constituent of the liquid lakes, and radar-derived topography is revealing the relief and depth of these lakes.  A major focus for the remaining 4 years of the Cassini mission will be looking for seasonal changes in the lakes as spring turns to summer in Titan’s northern hemisphere. 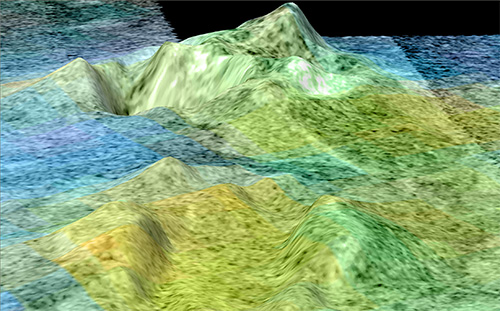 A perspective view looking at Doom Mons and Sotra Patera, the best substantiated cryovolcanic features on Saturn’s moon Titan. This 3D Cassini image was generated from a combination of stereo radar data to show topography and Visual and Infrared Mapping Spectrometer (VIMS) data showing compositional differences in false color. A movie showing the whole region can be seen at: http://photojournal.jpl.nasa.gov/catalog/PIA13695