White-nose syndrome (WNS) is an emerging infectious disease of bats caused by a recently discovered cold-growing fungus that thrives in dark caves where bats hibernate.  Although the fungus is known to cause WNS, the exact process by which it leads to death remains unknown.  USGS Fort Collins Science Center (FORT) biologists are remotely observing the hibernation behaviors of bats before and after the arrival of the WNS fungus to better understand how aberrant behaviors associated with fungal infection might cause WNS mortality.  Working in collaboration with the National Park Service, U.S. Fish & Wildlife Service, and several state and academic partners, FORT oversaw rapid development and deployment of ruggedized near-infrared and thermal video surveillance systems capable of imaging bats deep in the caves and mines where they hibernate during winter.  This work represents the first successful long-term monitoring of bats in hibernation sites over entire winters and is shedding important light on the pathology of WNS. 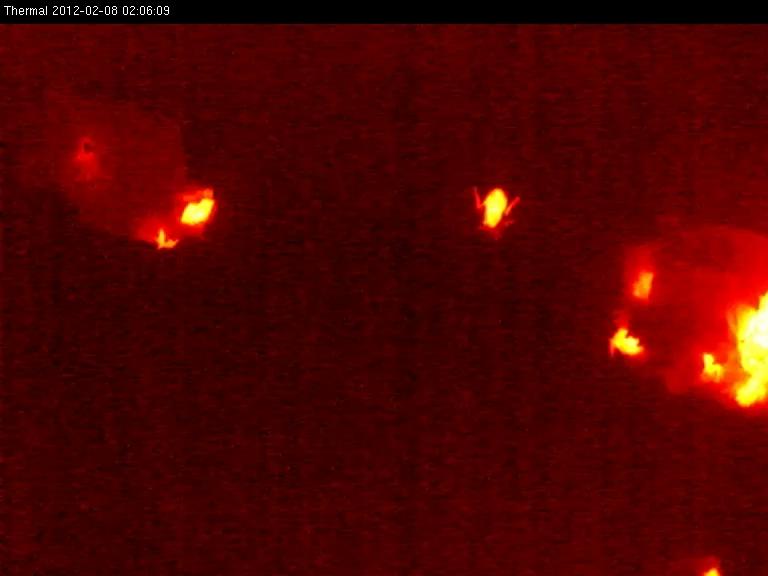 Thermal imagery showing winter activity in two clusters of approximately 50 bats each (lighter areas to upper left and middle right) during mid-winter in a cave in the southeastern United States.  Lighter colors represent warmer temperatures and show individual bats or clusters of bats that have warmed their bodies from the colder temperatures of hibernation.  The individual bat seen between the two clusters is crawling across the cave ceiling.