Wind turbines are causing unprecedented mortality of migratory tree-roosting bats and are also affecting other bat species of conservation concern.  Although collisions of bats with tall structures were historically rare, it is now estimated that several hundred thousand tree-roosting bats in the United States die at wind turbines each year.  The causes of bat susceptibility to turbines remain unknown, and there are no reliable ways of predicting risk to bats before building turbines at a site.  Understanding the problem is hampered by the difficulty of observing small animals flying in the dark around 30-story structures.  USGS scientists and partner organizations have developed new ways to monitor bats at night around wind turbines using a combination of near-infrared and thermal video, radar, and acoustic detectors.  During the summers of 2011 and 2012, scientists conducted two pilot studies that involved long-term remote monitoring of turbines at night, which represents the longest effort of this kind.  Ongoing work in 2013 will further refine the combined use of these remote sensing technologies to understand and minimize the impacts of wind turbines on bats. 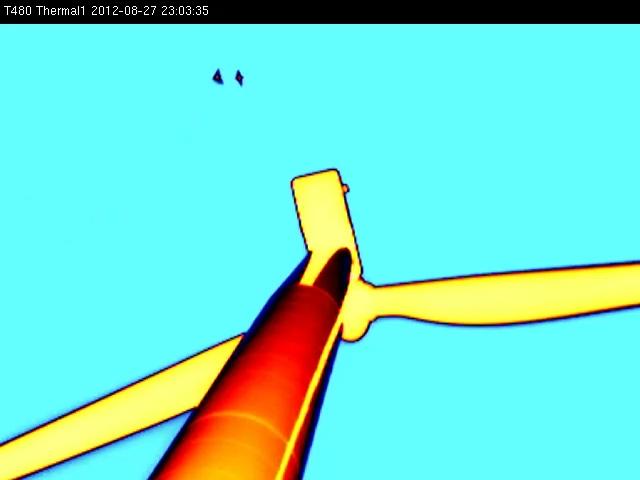 Still image of thermal video showing two bats chasing each other at night behind an operating wind turbine.

The image comes from a surveillance camera situated on the ground and pointing upwards toward the top of the 80-m (24-story) tall wind turbine, The red cylinder is the turbine monopole from which two of the three turbine blades can be seen in yellow projecting to the left and right of the scene. The rectangular shape near the middle of the image is the back of the turbine nacelle (machinery housing). The bats, flying approximately 60 m above the camera, can be seen at the top of the image above the turbine.