Mars is a major focus of U.S. and international space programs with five currently operational spacecraft (Mars Odyssey, Mars Express, Mars Exploration Rover Opportunity, Mars Reconnaissance Orbiter, and the Mars Science Laboratory Curiosity). The USGS Astrogeology Science Center is involved in all of these missions as science team members and supports mission operations, ground software development, and data archiving.  The USGS leads the development of software to process raw images into geolocated data products and the creation of topography maps from imagery.  The topographic maps have been especially useful to plan the traverses of the Mars rovers, to find landing sites that are devoid of rocky terrain and slopes (see figure showing topography of the landing site for the Curiosity rover) and to adjust the software parameters for the altitude-sensing radar systems used by Mars landers.  Data and imagery returned by the rovers confirm the accuracy of the USGS topographic maps (e.g., http://mars.jpl.nasa.gov/msl-raw-images/mosaic/6/0/N_L000_0169XEDR006CYLTS_0000_DRIVEM1.png). 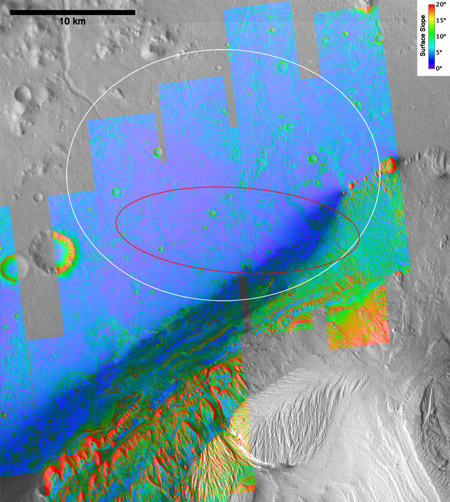 Topography of the landing site for the Curiosity rover produced by the USGS Astrogeology Science Center using images obtained by the HiRISE camera onboard the Mars Reconnaissance Orbiter.  The black and white part of the image is a lower resolution base map, and the colored areas show slopes derived from stereogrammetry.  The amount of topographic data produced by the USGS for this landing site alone is almost double the data volume of the global laser altimetry dataset for Mars.  The white and red ovals show the landing ellipse before and after mid-course corrections, respectively.