Does remote sensing information from Landsat and similar moderate resolution Earth-observing satellites provide measurable economic benefits to society?  For a case study of 35 counties in northeastern Iowa, USGS scientists and economists demonstrated the value of information (VOI) from remote sensing by using improved agricultural production and nitrate-leaching estimates enabled by Earth-observing satellites.  As compared to the situation without satellite information, these estimates can provide additional benefits to society through more optimal allocation of production without sacrificing public health and groundwater quality in an agricultural region.  In Iowa, groundwater pumped from aquifers is used as the source for drinking water by as many as 80 percent of residents.  For this application in northeastern Iowa, the marginal benefit of the VOI (in 2010 dollars) is estimated to be $838 million ± $197 million per year, which corresponds to a net present value of $38.1 billion ± $8.8 billion for that flow of benefits into the foreseeable future. 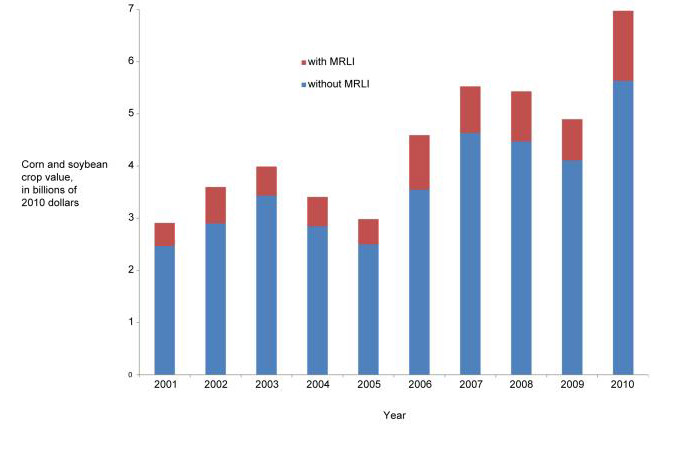 The Bar graph shows the annual flow of economic benefits with and without moderate-resolution land imagery (MRLI) for the 35-county northeastern Iowa region used as a case study by the USGS. The value of corn and soybean production using the observed land-use pattern is shown by the blue bars.  The higher value illustrated by the red bars would be possible with reduced risk of groundwater contamination if corn production were moved to lands identified to be less prone to leach nitrate or to lands with fate and transport properties that render aquifers less vulnerable to leached nitrate.